With the blessings of Dr. Pailla Malla Reddy and a tag line of ‘Telugu Kalala Thota, Telangana Sevala Kota Telangana’ American Telugu Association had a great launch on April 5th in the presence of Kalvakuntla Kavitha, M.P. Telangana state.

The Dasara event started with Inter-District Volleyball Competitions at 10:30 am followed by cook-out. By 12:30 pm hundreds of people flocked around food booths by 10 districts. A hard-to-find feast of nearly 100 varieties of authentic festive food items, ranging from rare authentic Telangana Sarvapindi, Pacchi Pulusu, Purnaalu to mutton curry, left the people licking their fingers for two long hours. Taati Kallu (palm wine) has overpowered all other ‘English’ drinks at the Cocktail stations. Someone fondly called it as ‘White Label’. 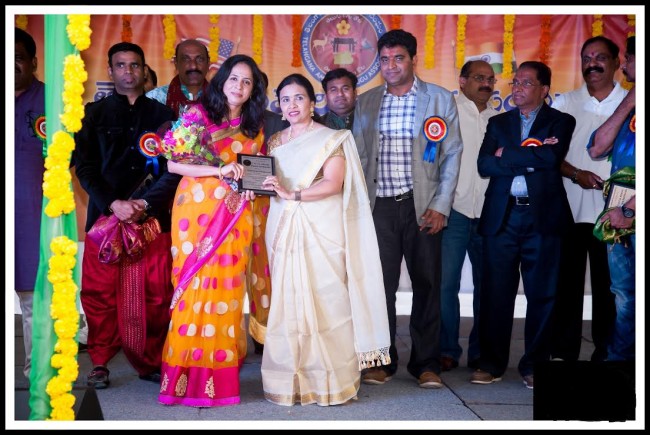 By 1:30 pm thousands of cheerful crowds filled the grounds. The on-stage cultural shows had mix of songs from different genres presented by Guest Smt. Singer Adarshini, Smt. Sharada Sai (both from India), Ram Durvasula, Srinivas Durgam, Janardhan Pannela and several other local singers. A short by hilarious unique item by Mimicry Ramesh left the crowds cheering all the way. Dances by various top coordinators were received lot of applause. Two folk dances choreographed by Neelima Gaddamanugu Garu added a folk flavor. So did the item by the students of Jyothi Chintalapudi Garu. The signature item, Story of Mahishasura Mardini by Aparna Turaga was a real tribute to Goddess Durga. Later Deshapathi Srinivas Garu has delivered a powerful and inspiring talk in praise of Telangana culture, language and customs. He said people in Telangana exude affection inside out.

A highly energetic and invigorating Bonaalu procession with Ganesh Kasam as Pothuraju rocked the grounds for over one hour before it was offered to Goddess Pochamma. Thanks to Edukondalu Anandapu, Venkatesh Polu, model Pochamma temple was built on site which left everyone astonished. Another unique event was a district level parade of people hailing from 10 Telangana Districts. The evening ended with an electrifying grand show of Ravana Dahanam (effigy burning), an authentic Dasara tradition, Jammi Chettu pooja, Alai Balai followed by professional fireworks. One of the several stories says that on Dasara day Lord Rama killed Ravana. Three prominent people, title sponsor Narsimha Rao Tambarneni (IIT Workforce), President Jhansi Reddy garu and Narender Reddy garu have been chosen to release bows to do the Ravana Dahanam using simulated technology of lighting an Olympic torch.

As many as 27 sponsors were recognized on stage with plaques, shawls and bouquet. Notable amongst them was Narasimha Rao, the title sponsor of the event. Teams of all the Telugu community organizations, too, were recognized – ATA, Amruthavarshini, IFA, GATA, Maitri, NATA, NATS, TAMA, TANA and TDF. The Guest of Honor was Consul D.V. Singh, from the Consulate General of India inAtlanta.

Several leaders from National Team of TATA from all part of the country – Jhansi Reddy, President, Haranath Policharla, Co-Chair, Advisory Board, Mohan Patlola, Member Advisory Board and Mahender Musuku, President-Elect and several Board of Directors (BoDs) were excited to be a part of these festivities. Bharat Madadi, Executive Director, Goutham Goli, Director and Treasurer, Dr. Sreenivas Gangasani, BoD, Dr. Satyanarayana Reddy Tangirala, BoD and Srinivas Avula Regional Vice President were among the local TATA team who expressed their pride and joy of being the part of this almost-impossible and one-of-its-kind event. Many from the audience even said that they not seen such a mega event in their entire life both inIndiaor theUS. Five distinguished persons were felicitated recognizing their services to the community – Late G.S. Reddy, Narender Reddy, Pramod Sajja, Satish Alapati and Dr. Sujatha Reddy.

TATA had expressed their happiness at announcing Deshapathi Srinivas Garu as the cultural ambassador for the organization, and he had graciously accepted the same.

Finally the efforts of Goutham Goli and Srini Avula, the persons who steered several teams relentlessly for over two months were applauded by the national team and was recognized aptly. Goli, who looked visibly modest, gave the due credit to all the teams.

The TATA team has thanked Vakiti Creations for Photo & Video, Divinity AV for Audio and Suresh Sajja for the venue. The stage show was put together and managed by Viju Chiluveru along with Shanker Gandra. The MCs of the event were Swapna Katta and Madhurima Charugundla. Backstage help was provided by Indu Priya, Shaker Gandra and Dilip Tunki.

Here is the link for photos: http://www.vakiti.com/TATA/TATA-DASARA/