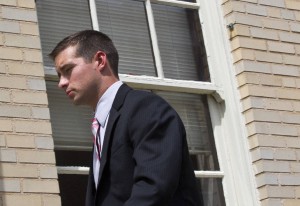 Washington, Oct 31 (IANS) “It’s not only police lives that matter. All lives matter,” a new jury was told as it weighed afresh evidence against an Alabama police officer charged with using excessive force on an Indian grandfather.

“The defence says the community must respect police, but the police must earn the respect of the community,” Assistant US Attorney Robert Posey told the jury in a Huntsville, Alabama court Friday in his final arguments.

The first trial of former Madison Officer Eric Parker for Feb 6 slamming of Sureshbhai Patel, who had arrived days earlier from India to take care of his grandson, ended last month with a 10-2 in favour of acquittal.

Posey told the jury that in deciding whether the force was excessive they need to look at the severity of the crime in progress, according to local Al.com.

The call from a neighbour about a suspicious person in the neighbourhood, said Posey, alleged only: “Walking, standing, looking. None of these are crimes.”

He also urged the jury to consider immediacy of the threat to the officer. “This officer is saying he had to do this because of his safety,” said Posey, arguing that walking away from officers is not evidence a suspect is armed.

Patel was not armed. “Just doesn’t make sense,” said Posey. Parker, he suggested changed his story after he realised he could not “stand him up and brush him off.”

He said then Parker began to develop a reason for the stop, asking a dispatcher for help identifying crimes in the area for probable cause. Posey said that suggests Parker knew what he did was wrong.

Defence attorney Robert Tuten put the blame on Patel saying “All Mr. Patel had to do was stop.”

He said if Patel had shown officers some identification, they would have written a report and sent him on his way. He said police are obligated to investigate calls from neighbours concerned about someone suspicious in the area.

Patel didn’t speak English and didn’t understand the officers’ questions. But, Tuten said there was no way Parker could know this was a “harmless Indian grandfather walking down Hardiman Place Lane.”

“We all feel sorry for Mr. Patel. We wouldn’t be human if we didn’t,” he said, but he suggested the video shows Patel did not comply with police orders. “The event, this incident, was escalated by what Mr. Patel did. All he had to do was stand there.”

Posey offered final rebuttal to the jury saying it’s true to say there are lives on the line during police encounters, but he added: “It’s not only police lives that matter. All lives matter.”

The new jury deliberated in private for over an over hour late Friday after hearing three days of testimony. It would resume its deliberations Monday after once again watching the video of Parker taking Patel to the ground.