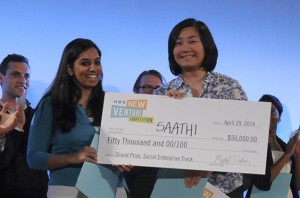 Washington, May 3 (IANS) Four young entrepreneurs from India are among this year’s winners of Harvard Business School New Venture Competition (NVC) inspired by a belief that “one simple idea can change everything”.

The Grand Prize in the Social Enterprise Track went to Saathi, founded by Amrita Saigal (MBA 2014) and Kristin Kagetsu at the grand finale of the competition in Boston Tuesday, according to an HBS media release.

The venture received the $50,000 Peter M. Sacerdote Prize in the competition which awards cash and in-kind prizes totalling more than $300,000.

Currently in operation in two villages, Saathi plans to expand soon to five villages and employ 50 women to make the product.

Kumar received the $25,000 Satchu-Burgstone Runner-Up Prize for his project.

It aims to revolutionise the physical fitness industry with its on-demand video platform, featuring workouts created by the best boutique gyms and instructors.

Tomato Jos, founded by Mira Mehta and Nike Lawrence (both MBA 2014), Shane Kiernan and Jared Westheim of the Harvard School of Public Health was the runner-up in Social Enterprise Track.

It’s a vertically integrated tomato processing company that helps small farmers in Nigeria grow tomatoes that can then be made into tomato paste.

easyBiodata, competing in the Business Track, plans to disrupt the arranged marriage practice in India by giving the power of control and choice back to prospective spouses.

As part of the finale, a member of each venture delivered a 90-second pitch to the audience, leading to an electronic crowd vote and another win for Saathi in the Social Enterprise Track.

Entrepreneurs are “quirky, unreasonable, and irrational”, Meredith McPherron, director of the School’s Arthur Rock Centre for Entrepreneurship told the audience.