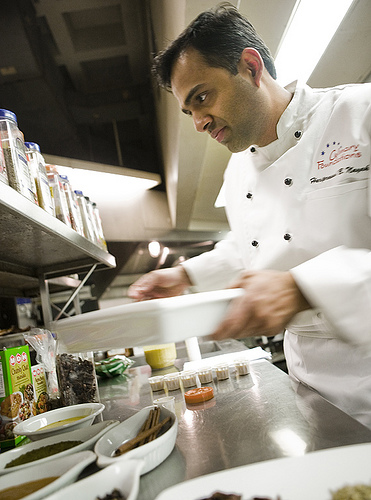 New Delhi, Dec 17 (IANS) South Indian cuisine is “very underrated” and goes much beyond idlis and dosas, says New York-based Indian chef Hari Nayak, who he is also working hard to dispel misconceptions about Indian food in general in the West.

“South Indian (style of) cooking is very underrated. People think that South Indian dishes are just dosas and idlis. But I grew up eating fish and other non-vegetarian food items — apart from the vegetarian ones,” Nayak, who grew up in Udupi in Karnataka, told IANS during a brief visit to the national capital.

“I would like to build a concept around it and make it more exciting to people (of North India) so that they can try something which is also Indian food and is tasty and healthy. For instance, we use coconut milk instead of cream. It is lighter and healthier,” added the restaurateur.

There is the same misconception about Indian food in New York and other parts of the US and the UK as well.

“If we talk about Indian food, it’s all about Punjabi ‘khana’ in the West. If I open a South Indian restaurant serving just Kerala or Goan food, the Westerner would come and ask for naan, chicken tikka masala and dal makhani. That’s what they are exposed to.

“If I don’t serve that, they won’t come back. They would say, ‘This is not an Indian restaurant’. So, misconceptions are there.”

Chefs like him and the others, he says, are trying to change the thought process of “what a Westerner thinks about Indian food”.

“We are working hard to change the perception of Indian food — that it not greasy, not always curry-based. There is so much more to Indian food than that. Hopefully, in the next 10 years, Indian regional food items apart from Punjabi will be enjoyed by Westerners as well,” said Nayak, who shares a strong bond with popular chef Vikas Khanna.

Would he blame Indian chefs for emphasising more on North Indian cuisine in the West?

“In the early 1960s, when Indian cuisine started getting popular in the West, chefs focused only on that (North Indian food). Nobody tried to do something different. Since the last 30-40 years, chefs have been serving the same things, so people have preconceived notions about Indian food.

“I think Indian chefs are to be blamed — but that’s what was selling. After all, it’s business. Even now, if you go to a Kerala restaurant, you will still find naan, rotis, chana masala and tandoori chicken on the menu because they don’t want people to walk out.

“There are Chettinad restaurants in New York but the last two pages of the menu are dedicated to North Indian food. It’s unfortunate,” said Nayak, who moved to the US over two decades ago.

How does he plan to bring about change?

“It won’t happen overnight. I do a lot of pop-up events. I use scallops, an ingredient which is familiar to the Western palate, and I make Indian food with that. I never use North Indian flavours much. That’s how I create awareness,” he said.

“We are at a nascent stage. If somebody comes in with a concept that’s interesting to me, then I will help,” he said.

“The chef can interact with about 15 customers at a time at The Trial, which is counter style. Serving just 15 people is not enough to sustain a business. So, there is a delivery model too,” said Nayak, who plans to launch his own restaurant in Bengaluru soon.

Before that, he will unveil his book — “Spice Trail” — which has “100 modern global recipes to excite and inspire home cooks”.

“I have written five books for the Western market, but my new book is for the Indian market. It will release in the beginning of 2018,” he said.

“It will teach home cooks to prepare food by adding new ingredients to their pantry… ingredients that are available in supermarkets. Using them while cooking will make their everyday food more exciting,” he added.