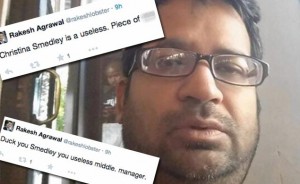 Washington, May 5 (IANS) Rakesh “Rocky” Agrawal, PayPal’s Indian-American strategy executive claims he had resigned from the payments giant before he unleashed a late-night Twitter rant against a couple of co-workers Friday.

“P.S. the tweet from paypal is factually correct but utterly misleading. I resigned before the events of Friday night,” Agrawal tweeted Sunday morning after PayPal Saturday announced his departure in a tweet, suggesting he was fired.

“I can confirm that I resigned early (Friday) evening. I then went out with friends who I haven’t seen in two years,” he wrote in an email Sunday morning to technology site Re/code.

“I have huge respect for David Marcus, Stan Chudnovsky and Hill Ferguson. I also think that Anuj Nayar is one of the best PR people I’ve worked with. I wish the team the best of luck in reinventing commerce,” Agrawal was quoted as saying.

Agrawal had mentioned a “Don Christmas” in his earlier series of tweets, but that mention was believed to be directed at Kingsborough, the website said.

Agrawal also hinted on Twitter Sunday morning that he may pursue creating his own startup.

“I will be prioritizing meetings with accredited investors who want to build a different kind of company,” he tweeted.

Later, the posts were removed and he blamed his new phone. He also later apologized to the pay service’s president, David Marcus, and vice president of growth and global strategy, Stan Chudnovsky, the Daily News said.