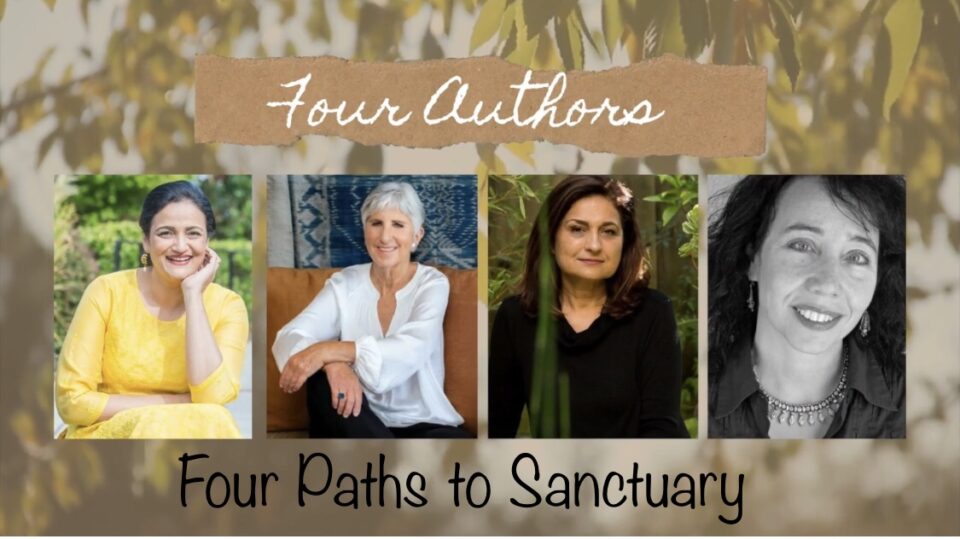 Atlanta, GA, April 8, 2021: Four different female protagonists embark on a path to self-discovery to eventually discover their sanctuaries. Hosted on Event Kind’s virtual platform, the authors of these protagonists discussed the unique paths they chose for their characters to find this safe haven in a panel discussion titled Four Paths to Sanctuary on Saturday, March 27, 2021.

“For me, sanctuary is that sacred place of belonging that I call home,” said Rasciot. “The whole message of my book is opening and going forth with awareness, and love is the message I want to bring to people.”. She added that she hopes that her work, a memoir, inspired by the healing experience with her Thai Buddhist teacher, will influence other people to explore and experience opening up their hearts, and experience the same compassion that she did.

“I was most interested in writing about this woman who wasn’t necessarily likable and wasn’t necessarily easy, but was 100% true to herself,” said Teitelman, of her protagonist Esther who left at the altar, sets on a journey sparked by an image (of Ganesha) in a park. While Teitelman mentioned the book was not a memoir, she said her Esther was inspired by her grandmother, who had also been left at the altar.

Relating her protagonist with the young girls she played with, in Pakistan, Rana described her Tara as “someone who questions the expectations around her and doesn’t necessarily take everything the way people want her to. And she’s not embarrassed about doing that. She has a mind of her own.” Rana added that she was particular about her protagonist not being a victim. “She is going to make sure that whatever happens in her life is something that she has thought about. And it might take time. It might take courage, but she has plenty of that.”

Highlighting the convergence of their narratives, Rao discussed the recurring theme that connects all four protagonists – their quest to uncover their sanctuary. “So, what does sanctuary mean to your protagonist?” asked Rao.

“Esther was on a quest of finding herself. She never probably even knew the word sanctuary, truthfully, but knew she had to pursue something she knew she had to take care of herself and be true to herself, no matter what. And that, no matter the war, no matter, her children no matter, anybody or anything. She had to follow this quest, which led her to India,” said Teitelman, adding that all four characters, ultimately are true to themselves.

Elaborating on Tara’s journey, Rana said she wanted to investigate “the deeper connection of multi-generational expectation of a mother-daughter relationship, of a daughter becoming a mother, and what happens to a woman when that happens to her, and also celebrate the concept of the communal family.” As for Tara finding her sanctuary, Rana said “the exposition that the finding of that sanctuary is more of a generational thing than an individual concept.”

Underlining another concurrent theme, resilience, Rao discussed the ability of the protagonists to rise above their circumstances. She said her Tara found her sanctuary within her, where she’s comfortable in her skin, and she believes in her own worth. “Each of our characters I think came into a deeper awareness of themselves and into their home within themselves,” said Rasciot.

Discussing their writing process, Rao asked the panelists how they continue to stay inspired. While Rasciot found out that being seated in a particular seat helped her unfold layers of her characters, Teitelman described herself as an accidental novelist who had always been a writer, but novel was an unanticipated journey. Rao said it took her nearly 10 years to get her book to where it is now. “Don’t quit your day job,” was the motto Rana said she followed while working full time and waking up at 4 in the morning to work on her novel, adding that she transported herself each morning from California to Punjab to feel and create the ambiance her story demanded.

Offering advice to a 14-year-old budding writer from the audience, the panel advised her to write, and then decide if is she writing for herself or for an audience and if so, connect with other writers. They also advised her that learning about the writing, publishing process and marketing a book becomes easier with a writing community. Advising her to read voraciously, they said it is important not to judge herself and persevere. Rana also offered to connect with the girl. Rao also brought up the issue of writing as an older adult. While some said they would be able to write more books had they started earlier, the panel mostly agreed that writing at every age brings its own experiences and is richer for it.

Underscoring the necessity of narratives highlighting female voices, Rao said as an immigrant it is a way to amplify issues such as abuse, patriarchy, sexism, racism, legal issues, language barriers, and financial dependence on the abuser. The panel agreed that women need to be heard more, to empower more women and broaden the conversation.

Answering an audience question about writing about dealing with hurt, Rasciot, said she wrote at a time when she was ready to reflect and dealing with the hurt was a long journey.

The event began earlier with a spotlight interview by Atlanta based singer/model Jennifer Rai with Veena Rao.

Rao spoke about her ten-year journey toward publishing a novel and shared advice for budding Indian American writers who dream of getting their work published.

In the course of her discussion, Rao elaborated on her storyline, zooming into her protagonist’s journey to empowerment despite the challenges of family, societal pressure and domestic abuse. She also highlighted the inspiration for the book and the way the book connects to women of all cultures.