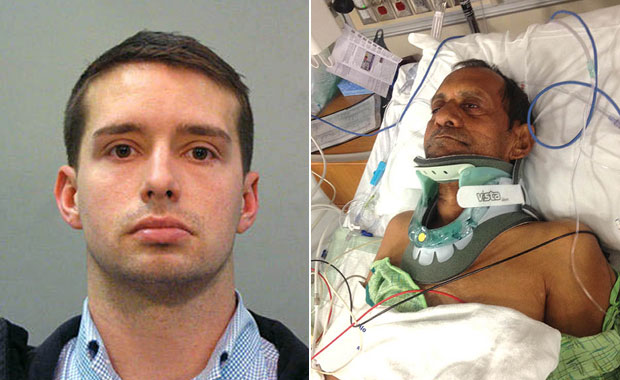 Atlanta, GA: Eric Parker, the former Alabama police officer who assaulted Sureshbhai Patel, 57 on Feb 6 while he was taking a walk in front of his son Chirag Patel’s house in Madison, Alabama is has been charged with violating the civil rights of the Indian man, authorities said Friday.

Parker has been indicted with a civil rights violation that carries up to 10 years in prison.  A federal grand jury decided there was enough evidence to bring charges against Parker, according to media reports.

“Parker’s actions deprived the man inMadisonof his right under the U.S. Constitution to be secure from unreasonable seizures, which includes the right to be free from unreasonable force by someone acting under color of law,” the Justice Department said in a press release.

Parker will plead not guilty, AP quoted defense attorney Robert Tuten as saying. “We are shocked, disappointed and overwhelmed by all the ways Eric Parker is coming under attack,” Tuten told AP in an email. “However, we are looking forward to seeing the indictment and having our day in court.”

U.S. Attorney Joyce Vance, in a statement, said people “must be able to trust the police.”

“Law enforcement officers who violate their oath to protect and use excessive force must be brought to justice,” AP quoted her as saying.

Parker was arrested and released on $1,000 bond from the Limestone County Jail a few days after the incident. Patel’s lawsuit,  which said his civil rights were violated, seeks an unspecified amount of money. According to the lawsuit, Patel said he tried to tell the officers that he doesn’t speak English, saying “No English. Indian. Walking.”

According to the lawsuit, Patel was paralyzed in his arms and legs after officers forced him to the ground, his face bloodied.