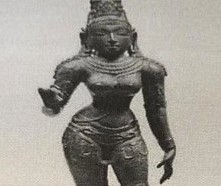 Chennai, Aug 8 (IANS) The Tamil Nadu Police’s Idol Wing have traced an idol of Goddess Parvati that was stolen from a temple in the state in 1971 to the Bonhams auction house in New York, officials said on Monday.

According to the police, the Parvati idol was part of five idols that were burgled from the Nadanapureshwarar temple at Kumbakonam on May 12, 1971. Police have now commenced the process to retrieve the idol and bring it back to India under the UNESCO’s World Heritage Convention 1972.

Following the complaint after they were stolen in 1971, temple trustee K. Vasu, in 2019, lodged another complaint and said that he had seen the idols in 1971 when they were in public worship, and after that, he had not seen them. In the complaint, Vasu said that he had seen the locks of the temple broken while reaching there for worship and then two trustees of the temple had complained to the Nachiarkoyil police and the inspector had visited the temple.

Vasu also said that no FIR was lodged then and hence he was filing the complaint. He filed the complaint with the Special Officer, Idol Wing, S.G. Pon Manickavel, and a case was registered in 2019.