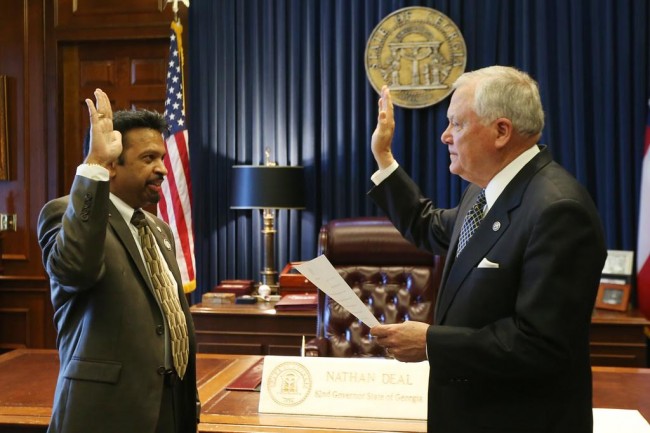 Atlanta, GA, February 2, 2017: Atlanta’s Dr Indran Indrakrishnan became the first physician of Asian descent to be appointed to the Georgia Board for Physician Workforce (GBPW) when he was sworn in at the Georgia State Capitol by Governor Nathan deal on Thursday January 12, 2017 .

Georgia Board for Physician Workforce  is comprised of distinguished physicians,  hospital/health system executives, and consumer members. This board is a watch dog for physicians’ distribution in the state. Its responsibilities include overseeing, monitoring and forecasting the supply and distribution of physicians in Georgia by closely working with medical schools, residency training programs, teaching hospitals, the University System of Georgia and many other state agencies. In addition, GBPW provides scholarships and loan repayment assistance programs to healthcare providers. The Governor has an initiative to fund 400 new residency slots in Georgia.   There are 126 new slots coming on line for July 2017 and this task will be one of the priorities of the board in the new year.

Dr Indrakrishnan is a clinical Professor of Medicine at Emory University School of Medicine and has his Gastroenterology private practice in Lawrenceville, a suburb of Atlanta. Governor’s gubernatorial executive appointment of Dr Indrakrishnan to the board has drawn lawmakers’ bipartisan felicitations from both sides of the aisle.

“It’s been a privilege working with Dr. Indrakrishnan over the years. His wealth of knowledge and experience will greatly serve the Board and I’m confident in his ability to develop the next generation of medical professionals, ensuring our citizens have access to outstanding healthcare,” said. Lt. Governor Casey Cagle.

Secretary of the State  Brian Kemp said he is proud that Governor Deal has appointed Dr. Indrakrishnan to the Board and that he would certainly prove to be an invaluable member. Georgia Senate President Pro Tempore David Shafer referred to Dr Indrakrishnan not only as a very good friend, but also as one of Georgia’s finest physicians, adding that he would serve the Governor and all of Georgia with distinction as a member of this important board.

Congressman Rob Woodall said he admired Dr Indrakrishnan’s commitment to serving his community and was thrilled to hear of his appointment to the Georgia Board of Physicians Workforce.  “Governor Deal has made a wonderful choice, and I know Georgians will be well served with Dr. Indrakrishnan in this new role,” he added.

Congressman David Scott said words cannot adequately express how grateful he is for the extraordinary healthcare services and resources that Dr. Indrakrishnan has provided to patients, adding that Dr Indrakrishnan is the most deserving of the Governor’s appointment to the Georgia Board of Physicians Workforce and he is  proud to recognize Dr Indrakrishnan  for this momentous achievement.

U.S. Rep. Hank Johnson, D-GA was effusive in his praise of the appointee. “Dr Indrakrishnan’s excellent work for his patients is only matched by the hard work he puts into his family and community. Dr. Indrakrishnan is well known as an embodiment of what it means to achieve the American Dream,” said Congressman Johnson. “In addition to distinguishing himself as a medical educator and practitioner, Dr. Indrakrishnan has built a standout reputation in the community for his volunteer and philanthropic efforts to help the less fortunate.”

Dr Indrakrishnan is on the boards of national and state non –profit organizations which include Fight colorectal cancer, Meals by Grace, Third eye dancers ,Georgia Colorectal Cancer Round Table and American India Foundation. In the summer, he was honored as one of the top 25 most influential Asian Americans in Georgia by Georgia Asian Times. Earlier this year, the Indian Union Minister Indian of Steel Chaudhary Birender Singh awarded  him  with the globally reputed “Bharat Gaurav Award” on behalf of  the India International Friendship Society (IIFS) which confers this prestigious award to luminous personalities  who have made outstanding contributions in their personalized fields including science, technology, education, politics and  & social work.