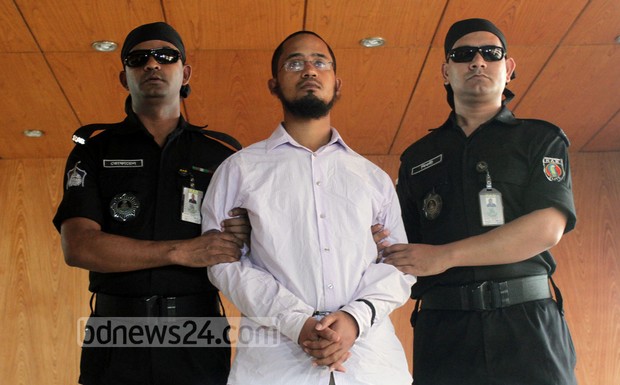 Dhaka, March 2 (IANS) The prime accused in the murder in Dhaka last week of writer-blogger Avijit Roy has been arrested by the elite anti-crime Rapid Action Battalion (RAB) of Bangladesh, media reported on Monday.

He had then secured bail from the Dhaka High Court.

Farabi Shafiur Rahman had also threatened an online bookshop, rokomari.com, to pull out Roy’s books from their site.

On February 26, Roy and his wife were dragged off a cycle rickshaw at a Teacher-Student Centre (TSC) intersection by two unidentified assailants and attacked with machetes.

Roy died of a fatal gash to the head while his wife and fellow blogger Rafida Ahmed Banna was severely injured.

On Saturday, following a tip-off, RAB conducted a pre-dawn raid at a five-storey building in the northeastern port city of Chittagong and arrested three suspected militants.

“We have seized 30 grenades. It appears they could have made some 300-400 bombs with the explosives we found at the den,” RAB’s commanding officer in Chittagong Lt. Col Mista Uddin said in a primary briefing.

Meanwhile, on Sunday, Bangladesh Foreign Minister Abul Hassan Mahmood Ali said it has decided to take the help of the US’ Federal Bureau of Investigation (FBI) in the probe into Roy’s murder following Washington’s offer in this regard.

India restores 10-year and e-tourist visas for US nationals