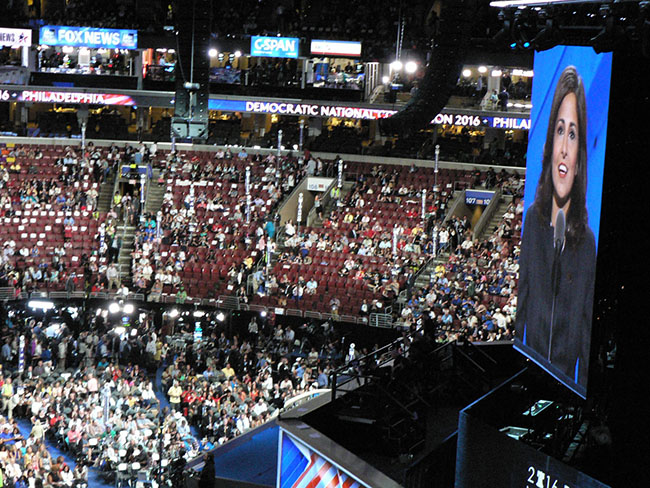 Neera Tanden, the president of the Center for American Progress Action Fund, was a speaker at the Democratic Party’s national Convention in Philadelphia on Wednesday, July 27, 2016. (Credit: IANS)

Philadelphia (US), July 28 (IANS) Three leaders from the Indian American community took the stage before the 4,765 national delegates and the national media as the Democratic Party Convention turned the spotlight on the community, recognizing its rising role.

The president of the Center for American Progress Action Fund, Neera Tanden, made an impassioned speech on Wednesday in support of the party candidate for president Hillary Clinton, declaring: “Hillary will always have our backing.”

She spoke candidly of her family’s travails after her father divorced her mother when she was five and how the public safety net saved them and helped her eventually get an Ivy League law degree and to become Hillary Clinton’s adviser and play important roles in her campaigns.

Congressman Ami Bera of California was presented as a leader reflecting the diversity of the Democratic Party in Congress.

Raja Krishnamoorthi, who is running for Congress from Illinois, came on stage as a “New Leader of Tomorrow.” He told IANS about the moment in the party limelight: “I am thrilled.”

If elected, Krishnamoorthi will be the fourth Indian American to serve in the House of Representatives.

Congresswoman Grace Meng, the head of an influential Asian American political action committee, called at the Convention for supporting Krishnamoorthi and said the presence of the Asians in Congress would grow with his election.

Krishnamoorthi, a lawyer and a technology and environmental entrepreneur, joked that he probably had a “mutant gene” that made him turn to politics in a community that focuses on careers in medicine, technology and education.

He said his family was in “dire economic straits” and had a difficult time when he was a baby, but the “generosity” of the United States helped them come out of it.

“Ever since then, I have been wanting to make sure that others have a shot at the American dream” like his family, he said.

Reflecting the rise of the Indian American millennials, an 18-year-old delegate from Iowa, Sruthi Palaniyappan, introduced her state delegation’s announcement of its votes during the Convention roll call Tuesday. She told IANS that she “definitely” plans to run for public affairs.

A Hillary delegate, she said she started at the local precinct level and worked her way up to get elected as a national delegate.

She said Indian American youth were organizing in politics and her message to them was “Step up to the plate or you are on the menu” – take responsibility and become active or you will be swallowed by the system.

She just finished high school and starts college at Harvard University in September.

Her father, Palaniyappan Andiappan, was elected to the national Convention credentials committee, which verifies the credentials of delegates and adjudicates disputes over representation. He said his daughter “inspired” him to join politics through her activism and enthusiasm.

Among the young Indian Americans starting out in politics is Neil Makhija, a candidate for State Representative in Pennsulvania. The 29-year-old said that while people are more focused on the presidential elections, issues that directly affect the people like education are decided at the state and local levels. That was why he was running for the state legislature.

Samai Kindra from Maryland has taken a year off after high school to work as an intern with the state Democratic Party working on mobilizing people to register to vote.

Even though Indians are less than 1 percent of the US population, they can play a crucial role in the “battleground states” – the six or so states like Virginia, Pennsylvania and Ohio where both parties are almost evenly balanced – according to Toby Chudhuri, a former White House strategy and communications adviser.

“There is no longer a mainstream, but many streams” in the US and it was important for the Indian American community to actively get involved in politics and have their voices heard, he said.

Indians have founded organisations to rally support for Clinton and other candidates and to raise funds for campaigns.

Indian Americans for Hillary Clinton (IAFHC) founded by Rajan Natarajan, a former Deputy Assistant Secretary of State in Maryland, is working at the grassroots level on mobilising Indian Americans to register and vote. When the organisation held a rally in Maryland in April, Clinton campaign chairman John Podesta attended it.

Natarajan said that presence of high political figures at their rallies was a sign of the recognition the Indian American community was now receiving from politicians.

IAFHC Co-Chair Devang Shah explained how a small community like Indian Americans can play an outsize role in elections in the battleground states.

In the last election, Obama won in Virginia with just 4.3 per cent of the votes, he said. In such a tight race, the Indian American community, which is concentrated in some states, can make the difference between victory and defeat, he said.

Shekhar Narasimhan has set up the Asian American Pacific Islander Victory Fund, which he said had raised $300,000 and has a target of $1.5 million. It will fund drives to mobilise voters in the six swing states and promote progressive candidates.

On August 12, Indian American leaders will be meeting in Las Vegas to see how they can help put more of their community in public offices, according to one of the organisers of the meeting.