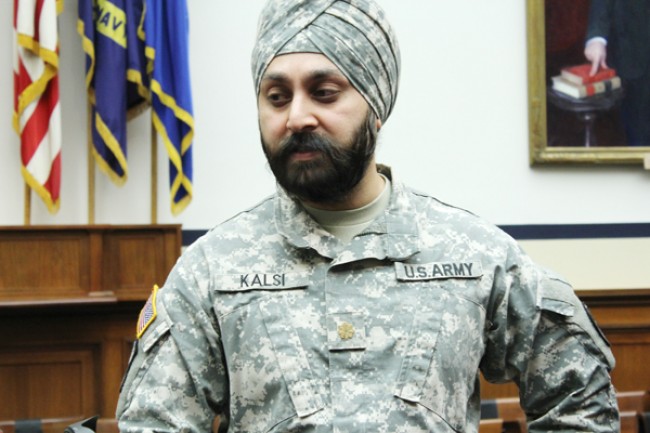 Philadelphia (US), July 29 (IANS) An Indian American, Major Kamaljeet Singh Kalsi, stood out in his pink turban among a group of US military veterans at the Democratic National Convention stage to root for Hillary Clinton as the party’s presidential nominee.

Kalsi, accompanied retired General John Allen on stage along with a group of military veterans at the Wells Fargo Centre in Philadelphia on Thursday night.

Allen said that under Clinton the country will not “abandon the world”, and pursue enemies, defeat the Islamic State and stop the spread of nuclear weapons.

Kalsi, an emergency room doctor, served 15 years in the US Army, some of it in the “very violent and bloody theatre” of the war in Afghanistan, according to News India-Times newspaper.

There he had treated many victims of improvised explosive devices, the crude home-made bombs.

In 2009 he became the first Sikh in the US military to receive permission to wear a beard and turban, according to The New York Times.

On Wednesday, the spotlight was shone on three leaders from the Indian American community recognising their rising role in the US.

The president of the Center for American Progress Action Fund, Neera Tanden, spoke of her own family’s difficulties and how she was helped by the US government programmes that Clinton wanted to preserve and strengthened.

Representative Ami Bera of California was on stage to demonstrate the party’s diversity in Congress. Raja Krishnamoorthi, who is running for Congress from Illinois, was presented as a “New Leader of Tomorrow”.