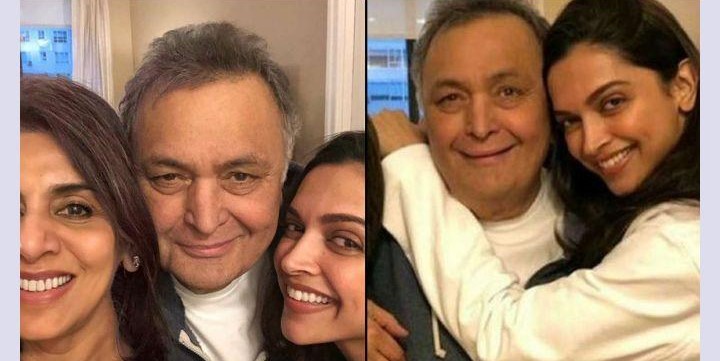 Mumbai, May 12 (IANS) Actress Deepika Padukone, who was in New York for the Met Gala earlier this week, ensured she took out time to meet veteran actors Rishi Kapoor and Neetu Kapoor, parents of her former beau Ranbir Kapoor.

Neetu called Deepika “adorable”, and took to her Instagram page to share three photographs from their meeting. They are all smiles and huddled up in the pictures.

“Such a fun evening with adorable Deepika Padukone. Gave lot of love and warmth,” Neetu wrote.

Her daughter Riddhima Kapoor Sahni commented with heart emojis in the comments section.

Rishi has been in New York for several months for treatment. Just last month, his brother Randhir Kapoor said Rishi will be back in the India in a few months, amid reports that he is now “cancer free”.

Neetu has been by Rishi’s side, and keeps fans updated with photographs of some of their special moments. Various Bollywood stars, including Aamir Khan, Priyanka Chopra Jonas and Anupam Kher have met Rishi in New York.