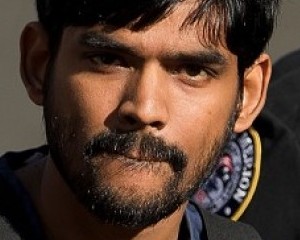 Atlanta, GA: A Montgomery County jury decided on the death penalty for Raghunandan  Yandamuri who is convicted of killing baby Saanvi and her grandmother in King of Prussia, PA. The verdict was reached shortly before 8:30 p.m. Tuesday. The jury began deliberations right around 5 p.m.

“I’m disappointed. Obviously it was a very tough set of facts,” @69News reported defense attorney Henry Hilles as saying. “I felt that if he had expressed remorse, he would have had a better chance at saving his life.” Hilles added.

Yandamuri had no visible reaction to the announcement. He looked down and continued scribbling notes, reported Philly.com.

Last week, the jury found Raghunandan Yandamuri, a 28-year-old techie, guilty of first degree murder, kidnapping, burglary and abuse of a corpse in the deaths of 10-month-old baby Saanvi and her grandmother Satyavathi, 61, inUpper Merion, PA in 2012.

Raghu told the police that Saanvi began to cry and he stuffed a handkerchief in her mouth to make her stop crying and placed a bath towel around her head to hold the handkerchief in place. “He then put her inside a blue suitcase he found in the bedroom, he took jewellery he found in the apartment and placed that in the suitcase with Saanvi, he then left the apartment and abandoned Saanvi’s body hidden in the steam room, of the mens bathroom, of the gymnasium located inside marquis Apartment Building,” the affidavit said.

“Raghu then dumped the knife, some of his clothes and the blue suitcase in a dumpster in another part of theUpperMerionTownship, he disposed some of the stolen jewellery in theSchuylkillriver and said he left some at this place of employment,” the police said. The authorities had also announced $ 50,000 reward for information leading to the safe return of the toddler.

The police, in its affidavit, said that Yandamuri told the detectives at the end of his interrogation to tell the media that his wife turned in him so that she could get the $ 50,000 award announced by the police and Telugu community for information leading to Saanvi.