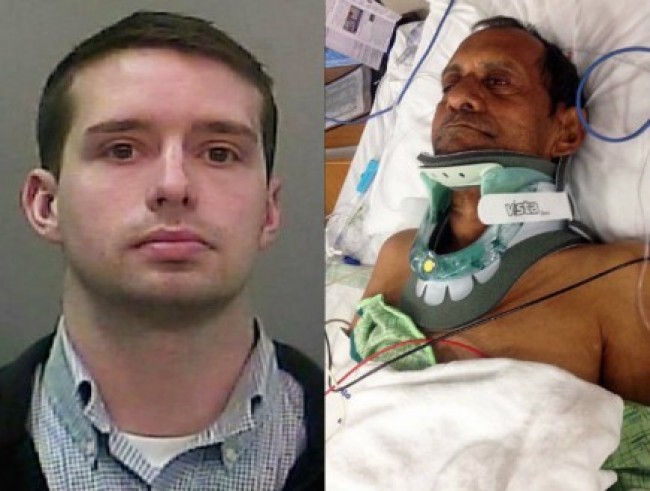 Atlanta, GA, September 8: Eric Parker, the Madison, AL police officer who slammed Indian grandfather Sureshbhai Patel to the ground while he was taking a walk outside his son’s home in February last year, has returned from administrative leave and has been assigned to the MPD Training Unit until he completes his required re-certifications. After his training is complete, he will receive his duty assignment.

In a statement posted to the department’s Facebook page on September 6, interim police chief Maj. Jim Cooke said: “Since Officer Parker’s acquittal of all federal charges and the dismissal by the Attorney General of the misdemeanor charges against him, I have extensively reviewed all of the documentation regarding the case, and I have made the factual determination that Officer Parker’s actions in February 2015 did not amount to a policy violation. This decision was based on the review of all departmental and court documentation.”

“I realize that some will question my decision. I cannot share the internal documentation that led me to this conclusion, but I strongly encourage you to read the Memorandum Opinion issued by Federal Judge Madeline H. Haikala after Officer Parker’s second federal trial, wherein she wrote, “[T]he evidence demonstrates that Officer Parker complied with MPD policy regarding preliminary investigations of suspicious individuals and MPD’s ‘Response to Resistance’ policy…Officer Parker made a split-second decision in a rapidly evolving situation rather than a premeditated decision to use violent force.” The opinion is an in-depth treatment of the law and its application to Officer Parker’s actions and I believe it will offer clarity to those who currently do not understand the decision I have made.”

Maj. Cooke said despite rumors to the contrary, his decision was not influenced by any person or group, but was based solely on the facts of this situation and the application thereto of federal law, state law, and local policies and regulations.

Readers will recall that in May, the State of Alabama dismissed a misdemeanor assault charge against Parker.

“After a careful review of the witness testimony included in 2,000 pages of federal trial transcripts and a re-evaluation of the evidence, we are seeking to dismiss State charges against Mr. Parker,” Alabama Attorney General Luther Strange had then said.

Earlier this year, to the shock of the Indian American community, Federal Judge Madeline Hughes Haikala threw out the case against Eric Parker, who faced up to 10 years in prison for using excessive force against 57-year-old Sureshbhai Patel,  leaving him partially paralyzed.

Sureshbhai Patel had arrived from India to the suburb of Madison in Huntsville,Alabama, to allow his daughter-in-law to go back to work by promising to care for his grandson.

On February 6 morning, Patel was taking a stroll through the neighborhood when police received a call mentioning a suspicious man. Eric Sloan Parker, the officer on duty, assaulted Patel, leaving him partially paralyzed with two injured vertebrae. Despite the fact that Patel insisted that he knew no English, Parker attacked him and has since been fired from the job. Parker, 26, has also been charged with questionable methods against minorities, the use of unreasonable force, as well as for subjecting Patel to an unreasonable search and seizure.

The case drew international interest prompting Governor Robert Bentley to issue a letter apologizing to Patel and to India.