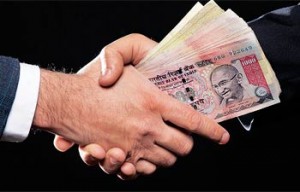 Washington, Feb 28 (IANS) Corruption is present at all levels of the government in India and officials frequently engaged in corrupt practices with impunity, says a US report, providing fresh fodder to the opposition in an election year.

Under the heading “Corruption and Lack of Transparency in Government”, the report said law provided criminal penalties for official corruption. But the government “did not implement the law effectively, and officials frequently engaged in corrupt practices with impunity.”

“Many government-run programs to alleviate poverty and provide employment suffered from poor implementation and corruption.”

It says the CBI registered 583 cases of corruption between the months of January and November. The Central Vigilance Commission (CVC) received 7,224 cases in 2012. Of those, 5,528 were received in 2012 and an additional 1,696 remained from 2011. The commission recommended action on 5,720 cases.

NGOs noted that bribes typically were paid to expedite services, such as police protection, school admission, water supply, or government assistance. Civil society organizations drew public attention to corruption throughout the year, including through public demonstrations and websites that featured individual stories of corruption.

Investigations into individual cases and legal punishment for perpetrators occurred, but in many cases a lack of accountability due to weak law enforcement, a lack of trained police, and the overburdened and under resourced court system created an atmosphere of impunity.

“So let me be clear. This is not just some high-minded exercise. This is about accountability. It’s about ending impunity,” said Kerry after releasing the report.

“We know that we’re not perfect. We don’t speak with any arrogance whatsoever, but with a concern for the human condition.”