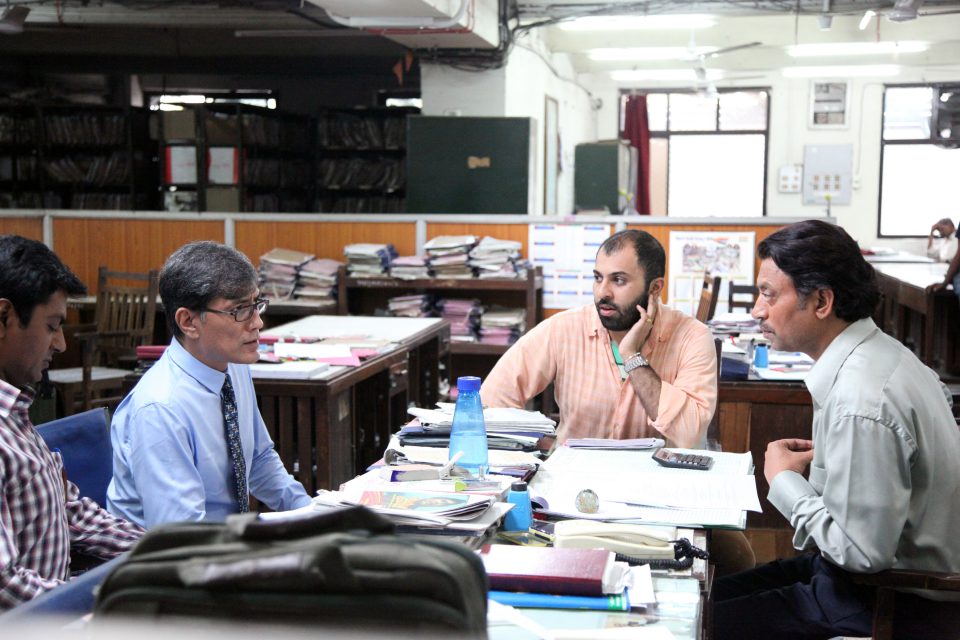 Washington, Feb 28 (IANS) Back in 2007 Indian-American filmmaker Ritesh Batra had embedded with Mumbai’s ‘dabbawallas’ for a couple of weeks while trying to make a documentary about them, but instead ended up making “The Lunchbox”.

“I wanted to find personal stories from among them. Instead we became friends and they started telling stories about the housewives they would pick up lunchboxes from,” Batra told IANS in a phone interview.

“I got more interested in that. So I abandoned the documentary and started writing this,” said the director, who has won the Best Debut Director prize at the prestigious 2014 FilmFare Awards for the film.

That was the genesis of the film set to release in New York and Los Angeles Friday after a stellar run at the world’s top film festivals including Cannes, Toronto, and Sundance where it met with rave reviews.

It then opens March 7 in San Francisco, Washington DC, Chicago and other major US cities.

Batra never anticipated the way the film seems to have taken both India and the West by storm.

“You are just trying to be honest to every moment of the film,” he said. “It’s hard enough to make a film. To anticipate what it’s going to do later is just impossible.”

The story revolves around Ila, a young middle class Mumbai housewife, trying to win back her husband’s affections through his stomach and how a rare mistaken delivery in Mumbai’s famously efficient ‘dabba’ delivery system of lunchboxes, from homes to offices, connects her to a testy old widower (Irrfan Khan) through notes in the lunchbox.

“It was a very difficult role to cast,” said Batra, who after lots of auditions spread over several months, settled on Nimrat Kaur, a relatively unknown actress who had earlier appeared in a couple of TV commercials in India.

Batra met Nimrat after seeing a couple of her plays at the recommendation of his casting director. “I had a great instinct about her, and when I met her the instinct grew stronger.”

And Nimrat turned out to be “just a great great fit for the part. She really inhabited the part,” said the director, who grew up in Mumbai and lives in New York. “I am really glad that we found her.”

For the lead character of Saajan and his office colleague Shaikh, “I always had Irrfan and Nawazuddin Siddique in mind and I was thrilled when they came on board,” he said.

Nawazuddin’s character was always part of the screenplay, Batra said, but “He just became more and more important as I kept writing.”

As for his technical crew “everything was sort of an educated choice to achieve a specific objective.” he said.

Except for the cinematographer(Michael Simmonds)and the editor, largely the crew is from Bombay, “because there is a huge thriving industry here”.

“It was important for me have the cinematographer from New York because he can see things that I can’t see being from here. So it was very important to have a foreign eye.”

“The editor (John Lyons) is someone I trust and always wanted to work with.”

Batra has no immediate plans for a new film. With “The Lunchbox” set to release in US then in Hong Kong, Israel, UK,

Japan, and Australia “I have a lot of commitments to the film for the next few months – lots of traveling.”

Make films for the world: Ritesh Batra to Indian filmmakers

Washington, Feb 28 (IANS) Ritesh Batra, director of the critically acclaimed “The Lunchbox” would like Indian filmmakers to “reach out with our films to the world” as India has a wealth of stories to tell.

“We should not restrict our audience to India and Indians. Indian films should be for the world,” says the director of what critics in his words have called “an Indian story with a universal heart.”

“We have a wealth of stories,” Batra told IANS in a phone interview ahead of the film’s release in New York and Los Angeles Friday clarifying reported remarks that the audience for off-Bollywood or indie films from India is abroad.

On the controversy over “The Lunchbox” being snubbed in favour of Gujarati film “The Good Road” as India’s official entry for the Academy Awards in Best Foreign Film Category, Batra said: “I think the process needs to be improved. It needs to be more in with the World’s.”

In Spain and Chile, for example, it’s their academies that “make decisions that are good for the cinema of the country because it’s the country that gets the Oscar not the filmmaker or the film.”

Batra does not consider “The Lunchbox” an indie film as it is an India-US-France-Germany co-production.

“I think in India a film without songs is called an indie film,” he quipped. “I don’t know if there is a formula” for the success of a film like his. “But if there is, I would like to know it.”

He agrees that the rise of multiplexes in India has been good for independent filmmakers.

“The Lunchbox was very successful, I think, because of that. It played in India for several weeks. So I think it’s very good of course.”

Batra who grew up in Mumbai, lives in New York City, and is married to a Mexican, believes that this “multiple existence” obviously “shapes my instinct in some way”.

But I think for me to analyse myself is very difficult because everything comes from a personal place of instinct,” he said. Maybe 15 to 20 years from now, one may be able to see how this affects a filmmaker’s work.

Batra said he was open to doing commercial Bollywood/Hollywood cinema, if he could make it something personal.

“Sure. It’s hard to anticipate. It depends on a story finds you as much as you find the story. If it’s something I can take it and make my own, I’ll do it.”

Balancing his life as a new father and as a husband while his wife was expecting during the making of the film was “very difficult honestly with the travel and trying to write,” Batra said. “It’s really a daily day to day effort,” but then “It’s like everyone else.

Batra, who divides his time between Mumbai and New York does not consider himself either an Indian filmmaker or an American one.

“I consider myself a filmmaker,” he said. “The stories just find you and it does not matter where they are set. If you can bring something to them then they are yours.”

'Shaadi Ke Side Effects' – looking into a marriage, with a smile