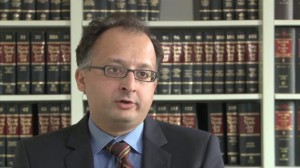 Washington, July 2 (IANS) Sujit Choudhry, a noted expert in comparative constitutional law, has become the first Indian-American dean of the University of California, Berkeley, School of Law, a top US law school.

Born in Delhi and raised in Toronto, Choudhry, 44, who was the Cecelia Goetz Professor of Law at New York University School of Law and founder of its Centre for Constitutional Transitions, began a five-year term as Berkeley Law’s 12th dean Monday.

Berkeley Executive Vice Chancellor and Provost Claude Steele has called Choudhry a “brilliant scholar, professor, and mentor,” who would inspire and lead with “big ideas” during a time of rapid change in the legal profession.

In an interview with Berkeley Law’s annual Transcript magazine, Choudhry called his new job “the opportunity of a lifetime”.

“What’s distinctive about Berkeley Law is its culture,” he was quoted as saying.

“It’s got hustle and drive and innovative people willing to experiment and try new things, which seems very much rooted in Berkeley’s identity as a public university.”

Choudhry’s recent work has had an international focus that dovetails closely with the university’s global outreach and scholarship, the Berkeley Law announcement said.

Choudhry is a member of the United Nations Mediation Roster, and has served as a consultant to the World Bank Institute and as an expert in support of constitutional transitions in Egypt, Jordan, Libya, Tunisia, Nepal, and Sri Lanka.

“Our house was all about intellectual stimulation. The radio was permanently tuned to CBC (Canada’s version of NPR), and we read several newspapers daily,” he was quoted as saying.

His late father, Nanda, taught economics at the University of Toronto; his mother, Ushi, taught nursing.

“They had a procession of academic visitors from around the world to the house for dinner parties,” he told the magazine.

“My brother, Niteesh, and I always sat at the table and were part of these events. It’s no coincidence that we’re both academics.”

Prior to joining New York University, Choudhry was an associate dean and the Scholl Professor of Law at the University of Toronto.

In 2011, the South Asian Bar Association of Toronto named him Practitioner of the Year.

In 2010, he was one of four Canadians to receive the Trudeau Fellowship, Canada’s equivalent of the MacArthur awards.