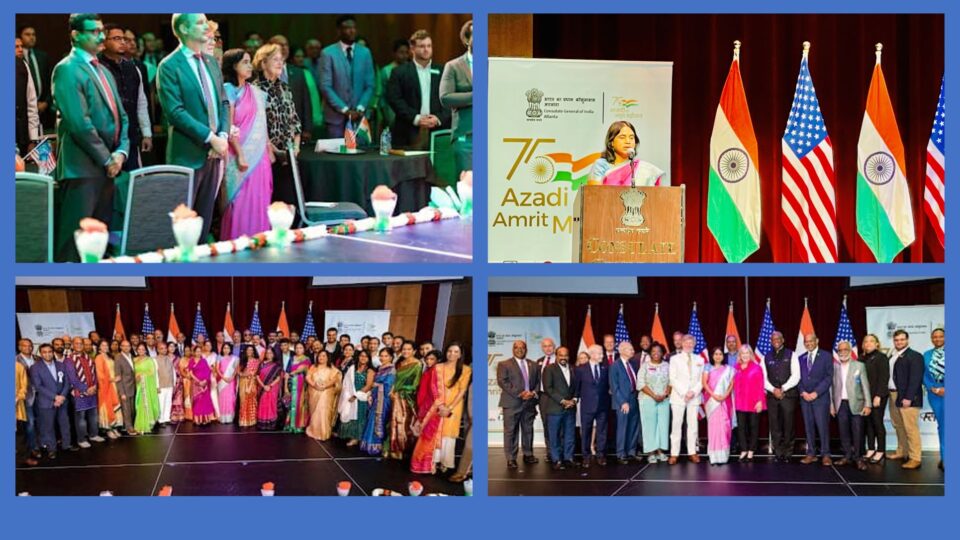 Atlanta, GA, September 2, 2022: The 76th Indian Independence Day celebrations hosted by The Consulate General of India, Atlanta at the Sandy Springs City Hall on August 15, 2022 showcased past glory, present accomplishments and future hopes of India. Earlier in the day, a public Flag hoisting event held at the Consulate General office drew several attendees who stood tall as the national anthem echoed beyond seven shores unfurling the flag with honor and pride.

“Compliments to my dear countrymen on the momentous occasion of completion of 75 years of independence. Many congratulations to all! It is heartening to see our tricolour being unfurled with pride, honor and glory, not only at all the corners of India, but also worldwide by our Indians who love their country immensely,” Prime Minister Modi said in his address from the ramparts of the Red Fort in New Delhi on the occasion of the country’s 76th Independence Day.

And true to his statement, The Azadi Ka Amrit Mahotsav (AKAM), an initiative by the Indian government led by PM Modi to commemorate 75 years of India’s independence successfully showcased Indian culture across the globe. With over 60,000 events successfully held across 28 States, 8 UTs, and 150+ countries, the initiative of AKAM is one of the largest programs ever organized in terms of scope and participation. Well over 6 crore Tiranga (Indian flag) selfies have been uploaded on the Har Ghar Tiranga website to date. The program conceived in a hybrid format envisaged a physical and emotional connect with the flag itself in the personal context and also envisaged a collective celebration and amplification of patriotic fervor through the act of uploading a selfie on the special website created for this initiative. (www.harghartiranga.com), as part of AKAM celebrations.

Atlanta certainly was at the forefront of the 75-week celebrations. Hon. Dr. Swati Vijay Kulkarni, Consul General of India, Atlanta, and Consul officers partnered with several local organizations to celebrate various events, such as Parakram Diwas and Rabindranath Tagore Birth Anniversary leading up to August 12, 2022.

“A splendid and historic moment indeed. The significant occasion is being celebrated as a historic democratic festival – what we call in Hindi as Azadi Ka Amrit Mahotsav. Amidst patriotic fervor, the commemoration is showcasing series of events on glorious history of progressive India and is being celebrated in India and overseas,” Dr. Kulkarni said in her address.

The event was anchored by Namita Rawat, Vice Consul (Administration), CGI, Atlanta. Along with rendition of Indian National Anthem by Geethu Venugopal, Akshata, Dhithi, Shruthi and Varshini and American national anthem by Rishi Manoj, the event also featured dance performances by eminent dance academies across Atlanta including The Odisha Society of America, GA, Nritya Natya Kala Bharti (NNKB), Abhinaya Dance Academy, and Bharathakala Naatya Academy and Third Eye Dancers (foundation) and a performance by Maharashtra Mandal members, each of which highlighted the multifarious culture and rich heritage India has to offer.

A sumptuous spread of Indian delicacies awaited attendees at the end of the night. “We always want to ensure our guests have the best of everything,” Mini Nair, Social Secretary at CGI Atlanta, said.