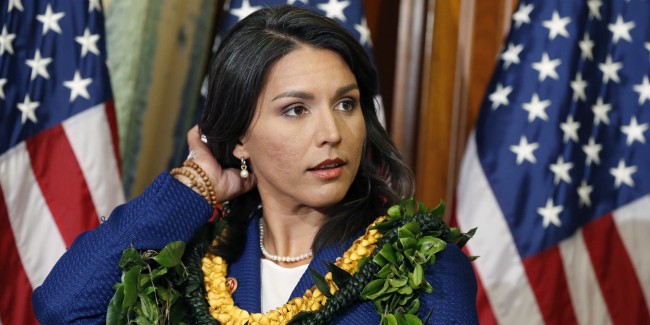 Washington, Jan 26 (IANS) The first Hindu elected to the Congress, Hawaiian Democrat Tulsi Gabbard, has said that she met Syrian President Bashar al-Assad during a secret, “fact-finding” trip to Syria and Lebanon.

Gabbard’s office said in a press release on Wednesday that the army veteran met Assad as well as Lebanon’s newly-elected President Michel Aoun and Prime Minister Saad Hariri during a trip earlier this month.

“When the opportunity arose to meet with him, I did so because I felt that it’s important that if we profess to truly care about the Syrian people, about their suffering, then we’ve got to be able to meet with anyone that we need to if there is a possibility that we can achieve peace,” the Hawaiian congresswoman said in a statement.

Gabbard said there is no possibility for a viable peace agreement in Syria unless Assad is part of the conversation. “Whatever you think about President Assad, the fact is that he is the President of Syria,” Gabbard told CNN.

Her office provided photos and video of the congresswoman on her trip, but none of the alleged meeting with Assad, reported ABC News.

Gabbard said that her trip further convinced her that the US should stop aiding any rebels fighting against Assad in the war-torn country. She called the rebel groups “terrorists”.

“The US must stop supporting terrorists who are destroying Syria and her people. The US and other countries fuelling this war must stop immediately. We must allow the Syrian people to try to recover from this terrible war,” she said in her statement.

“We must end our war to overthrow the Syrian government and focus our attention on defeating Al Qaeda and ISIS,” she said.

Gabbard said that in addition to Assad, she met a long list of people, including opposition leaders and refugees.

“My visit to Syria has made it abundantly clear: Our counterproductive regime change war does not serve America’s interest, and it certainly isn’t in the interest of the Syrian people,” Gabbard said.

“I return to Washington, DC, with even greater resolve to end our illegal war to overthrow the Syrian government. I call upon Congress and the new administration to answer the pleas of the Syrian people immediately and support the Stop Arming Terrorists Act.”