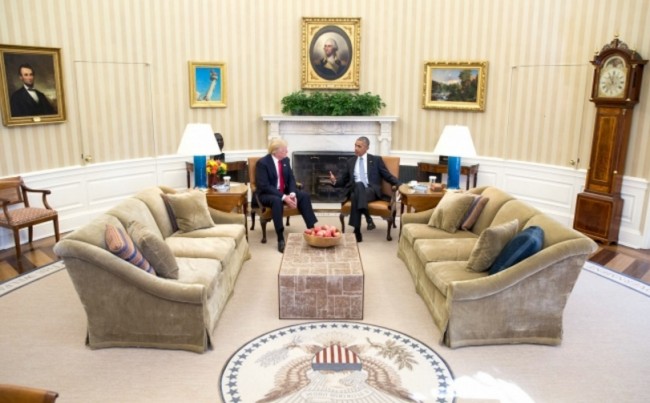 New York, Nov 15 (IANS) With signs of a mellowing Donald Trump backtracking on some of the harshest elements of his election promises, President Barack Obama, who had called him unfit for the high office, has now described him as a non-ideological pragmatist and hoped he would build on his successes.

“President-elect Trump is now trying to balance what he said in the campaign and the commitments he made to his supporters with working with those who disagreed with him, and members of Congress, and reaching out to constituencies that didn’t vote for him,” Obama said at his White House news conference in Washington on Monday.

“My advice, as I said, to the President-elect when we had our discussions was that campaigning is different from governing,” he added. “I think he recognizes that. I think he’s sincere in wanting to be a successful President and moving this country forward.”

A somber Trump softened some of the controversial election rhetoric in his first extensive media interview that he gave to Lesley Stahl of CBS and was broadcast Sunday.

While during his campaign the Republican had threatened wholesale deportation of the estimated 11 million illegal – or undocumented – immigrants, he said he would round up and deport or detain only the criminals and drug dealers among them, whom he estimated to number about two to three million.

As for the rest, whom he called “terrific people,” he said their future would be determined later when the borders have been secured.

On building a wall along the Mexican border, he said he was now open to a mix of wall and fence.

He also came out in favour of some elements of Obamacare, the universal health insurance program that is the capstone of Obama’s presidency. During the heat of the campaign, he had vowed that dismanting it was his first priority.

In a direct threat to his Democratic rival Hillary Clinton during a presidential debate, Trump said he would have a special prosecutor appointed to look into her cases.

He repeated it during his rallies, calling her “Crooked Hillary,” while the crowds chanted “Lock her up.”

Obama, who had declared during the campaign that Trump was unqualified for the job, now reciprocated his turn around with a statesmanly gesture.

“He is coming to this office with fewer set hard-and-fast policy prescriptions than a lot of other Presidents might be arriving with,” Obama said. “I don’t think he is ideological. I think ultimately he’s pragmatic in that way.”

From coast to coast, Democratic party supporters have been holding protests against Trump since his election, chanting: “He is not our president.”

In a message directed at them, Obama said, “Look, the people have spoken. Donald Trump will be the next President, the 45th President of the United States.”

Recalling the caustic opposition he had faced after his election, Obama said, “When I won, there were a number of people who didn’t like me and didn’t like what I stood for. And I think that whenever you’ve got an incoming President of the other side, particularly in a bitter election like this, it takes a while for people to reconcile themselves with that new reality.”

Obama, who left for Europe Monday night after his news conference, had a calming message for the allies across the Atlantic troubled by Trump’s election.

He said that Trump had in conversations with him “expressed a great interest in maintaining our core strategic relationships.” Obama said from this, “one of the messages I will be able to deliver is his commitment to NATO and the Transatlantic Alliance.”

During his campaign, Trump had criticised the international alliances saying that they had forced the US to bear the their burden and that he would insist on the allies picking up the tab and being more responsible for their defences.