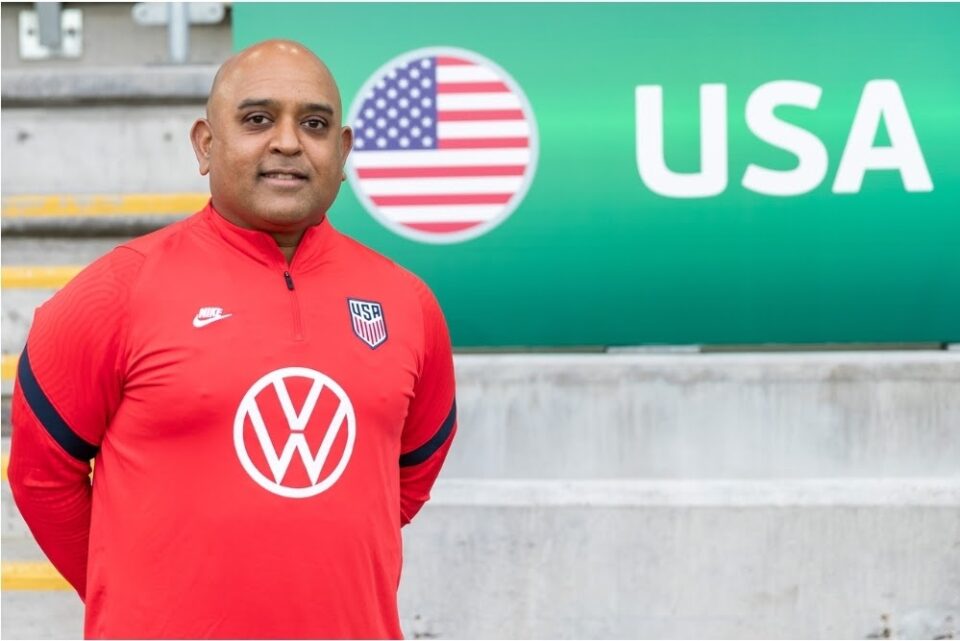 Atlanta, GA, August 30, 2021: Physician Assistant and Athletic Trainer Harris Patel has just returned home after working his fourth Olympics in a row. The Gwinnett County resident spoke to NRI Pulse about how it felt to represent America on the global stage.

Born in Zambia to Gujarati parents, he moved to the U.S. at age five. A University of Georgia graduate, Patel also started his own company, Medical Game Plan, specializing in orthopedics and sports medicine.

Patel said his interest in sports medicine grew, from playing neighborhood sports as a kid to getting his exercise and sports science degree from UGA.

“My father was a pharmacist in India and I wanted to do pharmacy for a long time,” he recalled. “And you know, organic chemistry told me I was not going to be a pharmacist.”

“So, I played sports throughout my life. Being little in the states, [I] moved here when I was five. So we just played neighborhoods. And now, I love medicine. I love sports. So let me do sports medicine,” he reminisced.

An avid football player and college football fan, Patel made several connections in his time at UGA. His best friend, who was on the college football team at the time, opened the door for several opportunities for him. Patel’s penchant for making connections and building relationships allowed him to work for several NFL teams such as the Colts. Those very qualities also brought him to work his 4th straight year at the Olympics.

Patel’s experiences in the Olympics this year were different due to COVID, but the Tokyo team was extremely clean and professional. All members of the medical team were tested prior to entering the village, and everything was sterilized and maintained extremely well. Patel worked in track and field, where the young team won 26 medals.

Although the heat and COVID made this year’s Olympics unique, Patel said there were no huge injuries and everything ran smoothly.

“The good thing looking back is that we all went and we all came back safely,” he recalled.

In addition to working at the Beijing, London, Rio and Tokyo Olympics, Patel also trained and helped heal athletes from the NBA, NFL, College football, and the WNBA. He had several heartwarming stories of how he connected with these athletes on a human level.

Patel also told a story of a patient who tore her ACL and continued seeing him months after she healed, even after his boss, the doctor, performed her surgery.

“I go get [the doctor], he comes into the room and he checks her out and says you’re doing great. And she’s like, well, that’s no offense to you. I know you fixed my knee. But my real doctor’s the person behind you. Because he’s been taking care of me from when I got hurt, from day one,” he remembered.

From his intuitive friendship with Falcon’s quarterback D.J. Shockley to a moving story about helping his friend’s mom heal her knee, Patel has always emphasized relationship building and empathy. That was his one piece of advice for everyone aspiring to be in his position.

“It doesn’t matter who you meet and what you do. Treat everybody and do everything like that’s your last job or last internship because you never know, 20 years from now that might come back around,” he advised. “My motto is never to burn bridges.”

When he isn’t helping his friends and family heal themselves or avidly watching football, Patel loves to travel and collect coins. One of his favorite locations to visit is Monaco, after a story of his friends throwing him a birthday party and seeing the breathtaking coast in a helicopter ride.

The hobby of coin collecting was something Patel inherited from his father. “My dad, for some reason, always had a penny collection and I would always play around with his coins and he’s got coins from all around the world,” he recalled.

“I have a penny collection I got all the way from the 1940s to somewhat current, a penny from each year,” he said.

“But you know, I think my real hobby is really just, I think if there’s anything you want to collect, I collect relationships,” Patel concluded.