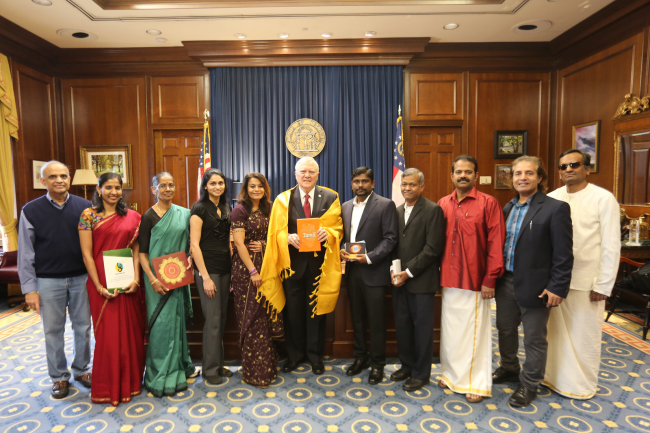 Atlanta, GA, January 17, 2018: For the first time in history, Georgia Governor Nathan Deal proclaimed the week of January 8-12, 2018 as the Tamil Language and Cultural week, recognizing the contributions of the Tamil community across the world and within Georgia.

Members of the Atlanta Tamil community received the proclamation on January 10 from the Governor at the Georgia State Capitol. Governor Nathan Deal was felicitated by Dr. Nazeera Dawood.

The Tamil Language week from January 8 to January 12 provides the opportunity to showcase and share the Tamil community’s vibrant culture and traditions of continued heritage with the state’s residents and visitors. This week also signifies the most important festival, “Pongal” to celebrate the hard-working farmers and the harvest season.

Tamil has been accorded with the prestigious recognition as one of the seven classical languages and it is one of the very few that has survived all the way through to the modern world. Tamil is spoken by approximately 76 million living around the world and is one of the longest-surviving classical languages in the world. Tamil language is predominantly spoken by the Tamil people of India and Sri Lanka. Tamil has an official status in the Indian state of Tamil Nadu, Indian Union Territory of Puducherry, Sri Lanka and Singapore. The Tamil community in USA is committed to preserving its rich heritage and has contributed to Georgia’s diverse population. There are approximately 50 Tamil schools in USA and 500 students per state are enrolled in these schools.

Harvard Tamil Chair (http://harvardtamilchair.org/) is a recent initiative to establish an endowed professorship for Tamil at Harvard University and the need for research in ancient Tamil literature to produce Tamil scholars trained in recent methodologies.

The group was ecstatic as the Governor beautifully articulated the verse written by a Tamil poet (Kaniyan Poonkundranaar) 2000 years ago, “Yaadhum Oore, Yaavarum Kelir”. The meaning of these words are: Deep rooted in uniting all on the basis of equity “All land is one, All are kith and kin”.

Gwinnett County Chairman, Charlotte Nash, had earlier, through a similar proclamation, recognized the contributions of the Tamil language and the Harvard Tamil Chair endowment efforts and proclaimed December 2017 as the Tamil language month in the county. 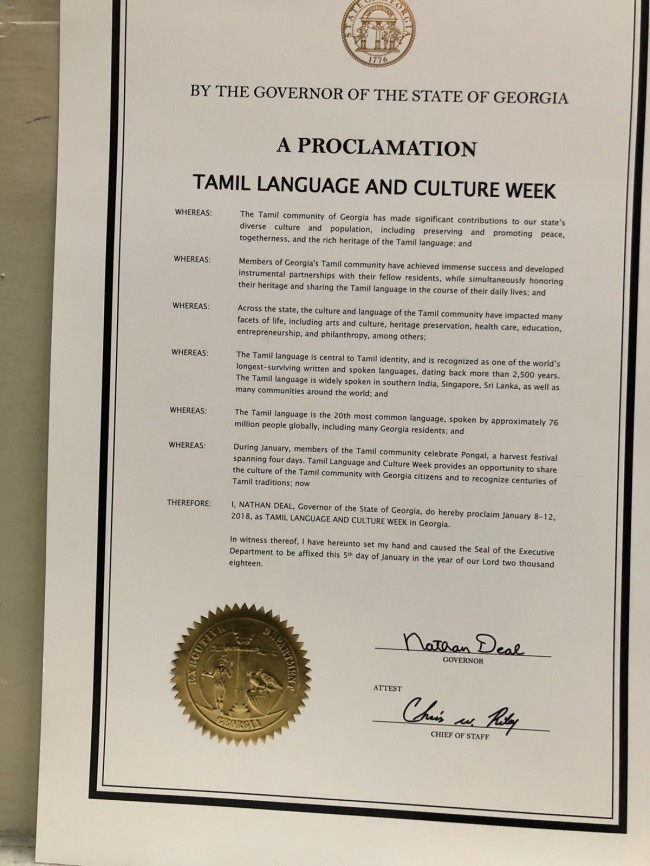