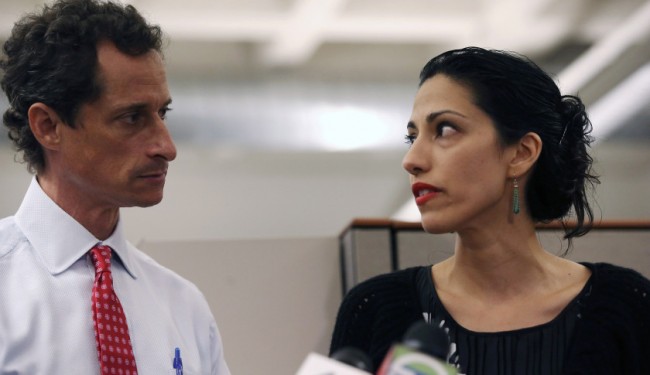 “After long and painful consideration and work on my marriage, I have made the decision to separate from my husband,” Abedin, whose father is from India and mother from Pakistan, said in a statement to New York Post.

“Anthony and I remain devoted to doing what is best for our son, who is the light of our life. During this difficult time, I ask for respect for our privacy.”

The report in the Post, which included conversations and photos that the paper said Weiner swapped with a 40-something Donald Trump supporter while his wife Abedin was on the campaign trail, was published on Sunday.

The Post report said that after Weiner sent the picture that included his son, wrapped up in a blanket next to him in bed, he briefly panicked that he had posted the picture publicly. “Ooooooh .?.?. I was scared. For half a second I thought I posted something,” Weiner reportedly wrote to the woman.

The woman handed over the conversations and photos to the Post under the condition that she not be identified, according to the report. She told the paper that she started chatting with Weiner over the internet in January 2015.

Weiner told the Post that he and the woman “have been friends for some time”.

But many of the pictures published by the Post showed the Republican shirtless or focused below his waist, and he often tried to steer the conversation toward sex, according to the Post.

Weiner resigned from Congress in 2011 after an initial sexting scandal, but after claiming he underwent therapy, ran for Mayor of New York City in 2013.

New Yorkers seemed to be ready to give him the “second chance” he had asked for until it was revealed that he had continued sexting under the pseudonym “Carlos Danger”. The fallout from both scandals was documented in the recently-released film “Weiner”.

Abedin is widely considered to be Clinton’s closest aide, virtually always by the candidate’s side on the trail. She is known as an influential voice on policy decisions and an intensely private person.