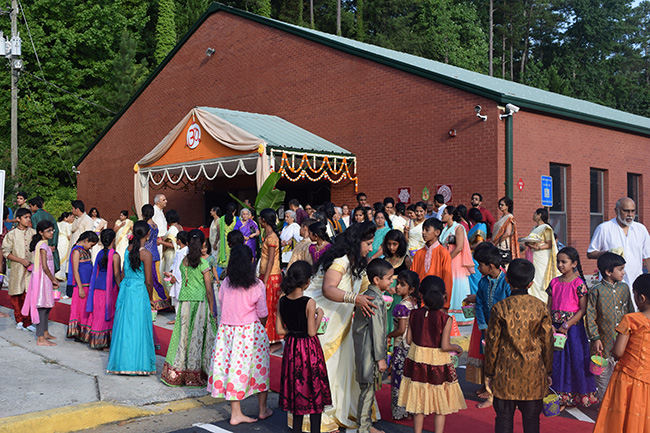 Atlanta, GA: After more than 26 years of  ‘sadhna’ of the dedicated Acharyas and devotees of Chinmaya Mission,Atlanta, a truly spiritual and educational center, Chinmaya Niketan was inaugurated by HH Swami Tejomayananda, Head of the Chinmaya Mission worldwide on July 25, 2015. With the blessings of Guruji Tejomayanandji and Dharmic ‘Vandana’, Sri Ram Parivar Pratishthapan in the center was performed.

The three day (July 25-27th) started with ribbon cutting ceremony, inauguration blessing and welcome speech by Acharya Raghu Grandhige followed by various spiritual Vedic rites including Moorthi and Vastu Homam and Aarathi. More than 500 devotees and inter-faith persons graced the occasion. At the end of the ceremony, delicious Maha Parasadam (Lunch) was served. 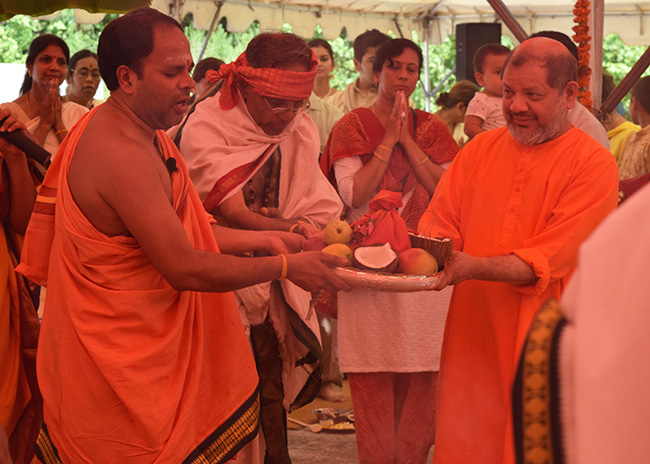 The discourse on ‘Bhakti in Tulsi Ramayan/Ramacharita Mansa’ by Swamy Tejomayanandaji during the three day evening program drew a large audience of devotees. Swamyji in a layman’s language explained his audience about the concept and meaning of ‘Bhakti’ citing Tulsi Ramayan and Bhagwan Ram. He said that ‘true bhakti’ should be unconditional and without any expectations. It is only through ‘true bhakti’ that one can achieve liberation and Moksha. On the subject of ‘moorthy’ puja, he explained that it is the first step in beginning the path of liberation. Once a devotee reaches a higher state of consciousness, he does not need worshiping of a moorthy.

During his discourse, Swamyji emphasized that Chinmaya Niketan will be a spiritual center of learning and devotion to God/Guru. The institution will continue Bala Vihar classes, organize day weekend family camps, teach Sanskrit, conduct study groups and hold spiritual satsangs and lectures for its devotees.  The Chinmaya Niketan has around 350 students in theAtlantaarea who benefit from various activities of the mission. The center is open to anyone irrespective of his/her religious faith who is interested in learning about the Vedantic and Hindu Dharma philosophy which tries to awaken the inner conscious of man and his spiritual mission in life.

Acharya Raghu Grandhige in his introductory speech recognized several prominent leaders including the head of the Norcross Police department, donors and others who helped the mission to build the beautiful Chinmaya Niketan building.