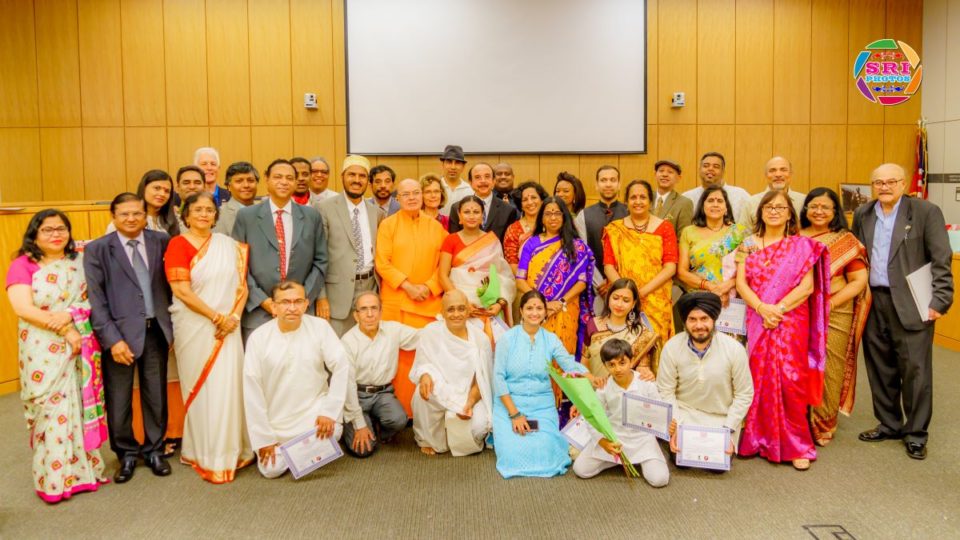 Atlanta, GA, October 10, 2019: “The greatness of humanity is not in being human, but in being humane,” the universal and timeless appeal of the quote, along with many more, stand testament to Mahatma Gandhi’s relevance to this day. Consulate General of India, Atlanta, Gandhi Foundation of USA (GFUSA) and Dhoop Chaoon, Hindi Theater Group, Atlanta came together to celebrate 150th birth anniversary of The Mahatma on October 2, 2019, with varied programs including feeding the hungry at the Church, garlanding the Gandhi statue, wreath laying at the King Crypts, and commemoration at the GSU College of Law Auditorium., Speakers for the evening included Pujya Swami Adhyatmanandaji, President of Sivananda Ashram, Dr. Swati Kulkarni, CGI, Atlanta, and Issac Newton Farris, Jr., President and CEO of King Center.

“Gandhi is very much relevant and dearly needed in the turmoil across the world. The King Center, along various organizations and citizens of Metro Atlanta played a key role in the installation of the bronze statue of Mahatma Gandhi in the MLK Historic Park on January 24, 1998. GFUSA was founded on October 26, 1997 in anticipation of this historic installation. It was wonderful to have MLK’s nephew Isaac partake in today’s proceedings,” said Subash Razdan, Chairman GFUSA, thanking all the supporters, performers, speakers. He complimented the team of Dhoop Chaoon for their efforts in the effective portrayal of the Mahatma in their play, ‘Gandhi’.

“Why is there so much violence? Because people have no patience,” said Swami Adhyatmanandaji, in his invocation. Urging everyone to emulate Bapu, he said mental hygiene was equally important as physical. “Love all, hate none,” he quoted Gandhi ji.

“We celebrate these milestones with a purpose. Because it reminds us of their lives, their teaching and their principles, because these people continue to live in their achievements,” stated Dr. Kulkarni, in her tributes.

“To other countries, I may go as a tourist but to India I come as a pilgrim,” Dr. Kulkarni quoted MLK, adding that influence of Gandhi, which was adopted by MLK, was a unique bond the history of both counties share. “He was one of the few who spoke about empowerment of women back then, in fact much of the progress we see today are influenced and driven by his principles.” Dr. Kulkarni mentioned that the bust of Gandhiji recently installed at the Consulate was very special to her, the statue of Gandhi ji in the MLK Historic Park however, she noted was significant because of its confluence with MLK.

“Gandhi and MLK are twin giants of non-violence. It was the method of Gandhi, indoctrinated by MLK that led to equal rights in America. India’s Gandhi was the Guiding Light,” said Farris, Jr., in his keynote address, adding that the challenge was to emulate Gandhi’s philosophy of justice through peaceful resistance.

Secretary of State, Brad Raffensperger, who could not make it to the event, sent his best wishes.

Sanjay Sehgal, Atlanta lead, Heartfulness Meditation had the dignitaries unveil Kamlesh Patel’s new book (Daaji) Designing Destiny. Sehgal also announced that the Atlanta chapter of Heartfulness has been awarded by Gwinnett County Government for its efforts to combat mental distress in Gwinnett County and around the world.

A fitting homage to India’s Bapu, “From Gandhi to Mahatma”, produced and directed by Atlanta’s prominent theater personality, Sandhya Saxena Bhagat of Dhoop Chaoon, treaded the audience through life and times of Gandhi. The play explored the transformational journey of a shy young man, too hesitant to speak in court who goes on to become a Mahatma. The play opened with the history of British occupancy of Bengal and the birth of Gandhi on October 2, 1869 in a well-to-do family with the father being the chief minister of a princely state and mother, a homemaker. Married early on, at age 13, Gandhi is sent to London at age 18 to study law. Bhagat’s Gandhi promised his mother, that he would stay away from women and alcohol. The play highlighted the turning point in Gandhi’s life, the discriminatory incident on the train in South Africa, where he is thrown out of a first class compartment because of his skin color, which led him to develop a method of civil disobedience to fight for better living conditions for men of color. The play highlighted Gandhi’s freedom struggle for India from the British through the Salt Satyagraha movement and concluded with the influence of his principle of ahimsa or non-violence being spread far and wide across the globe.

An apt tribute, complimented by a dedicated team of theatre group who portrayed the lifetime of Gandhi in the simplicity he lived by and inner strength he exuded was a fitting finale to a fine homage by the organizers.