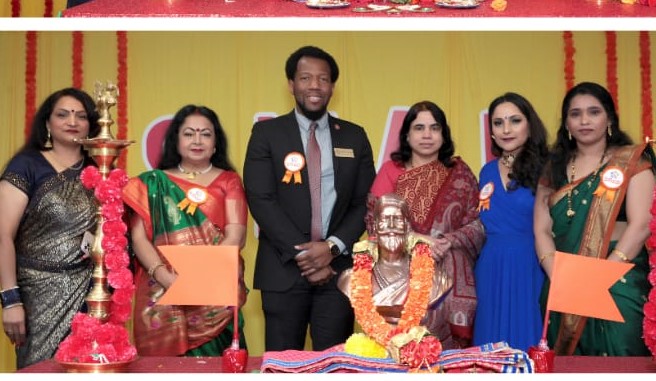 Atlanta, GA, April 22, 2022: Well over 600 people gathered at the Impact Hall at Global Mall that reverberated to the energetic music and dance performances at the third annual Chhatrapati Shivaji Maharaj Jayanti celebrations, hosted by Shivaji Maharaj Antarrashtriya Parivar (SMAP) Atlanta chapter on March 5, 2022. Founded by Vijay Patil as a movement in Los Angeles, CA, SMAP has currently branched out to 22 cities across the world. Consul General of Atlanta, India, Hon. Dr. Swati Kulkarni presided as the chief guest of the event.

The efforts of the organization to keep alive the principles lived and followed by Chhatrapati Shivaji received recognition from of the highest government offices of India.  “It is heartwarming to learn about the 2022 Shiv Jayanti organized by Shivaji Maharaj Antarrashtriya Parivar (SMAP) in 26 cities of the world. The initiative to honor the memory of Shivaji Maharaj by recollecting his ideals and values is admirable…” reads part of Indian Prime Minister Narendra Modi’s recognition of SMAP.

Atlanta Chapter, one of the 26 cities celebrating the occasion kicked off the festivities with an opening speech by Rina Gupta, SMAP Atlanta senior advisor, who highlighted the theme of 2022 – “Women Empowerment”. Founder & president of SMAP Atlanta chapter Monalisa Khandke welcomed everyone and presented the journey of SMAP and other highlights of the event.

In her address, Dr. Kulkarni highlighted the significance of Chhatrapati Shivaji, also lauding the efforts of the SMAP in gathering a large crowd and the attendees for encouraging events such as these.

The event also received a special letter of acknowledgment from Governor Kemp, whose representative Sebastian read out Governor’s wishes and message to the community, applauding the organizers for arranging such a grand event.

The event garnered support from many community based organizations such as IACA, IFA, FIA, Heartfulness, and many other local reputed non-profit organizations of Atlanta, along with media partners, Zee TV Hd, TV Asia, TV News 5, Atlanta Dunia, and NRI Pulse.

SMAP, in its attempt to meaningfully engage and encourage youth initiatives, launched SMAP Youth program, with Aarush Gandhi as the youth leader.

In her vote of thanks, Snehal Gandhi, EC member, thanked 27th Investment (gold sponsors) and Patel Brothers, OONet, Quanta Systems Inc, Global Mall (silver sponsors) for their generous contributions and support, along with all the volunteer and attendees.