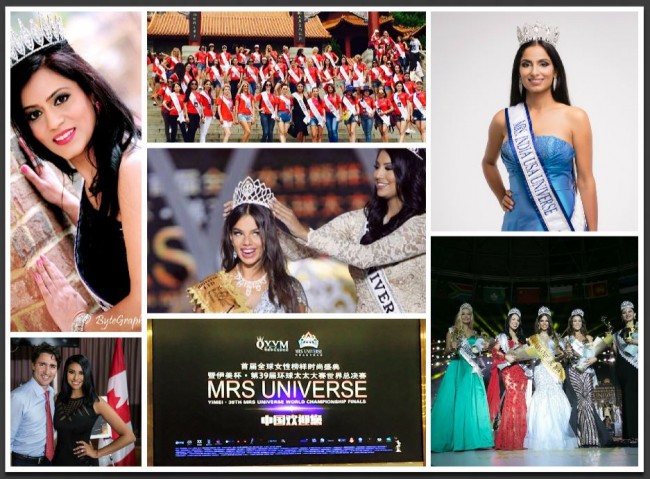 These words echoed around the lush 5-Star hotel conference room in the city of Ghuanzhou filled with 70 beautiful women from around the world! The words deeply described the pain of domestic violence victims and survivors questioning every man and woman in that conference room, why this suffering? The powerful message was delivered by the inaugural queen of Celestial Pageants Mrs India USA Universe, representing married women of Indian diaspora, at a an international beauty pageant held in China.

Taking you back to how it started. Mrs. India International and its Brand Ambassador Mrs. Shaveta Jain has been involved in the community for several years- from anchoring high profile Bollywood shows to judging a pageant to speaking for non-profit organizations. Her versatility and adaptability continuously brought her face to face with interesting opportunities. Taking it a step further, last year she launched her dream organization called “BeTheYou”. Under the organization she undertook to realize her dream of imparting the confidence to many others from her community and empowering them. She worked hand in hand with over 70 young girls, men and women over the past year, coaching, mentoring on self-confidence, public speaking and stage presence. She conceived and produced glamorous shows showcasing the vast and rich cultural heritage through Fabrics of India at Indian as well as main stream platforms. Her work was applauded by the community, show producers as well as by her teammates.

The success story spread across borders and soon Mrs. Jain was offered National Directorship for USA by an International pageant Mrs. Universe Ltd, a global beauty pageant and a human rights forum. The current and reigning queen and titleholder, Mrs Universe 2015, is Ashley Callingbull-Burnham ofCanada.  Mrs. Burnham is a multiple times beauty pageant winner, a model and an actress. She voices concerns faced by victims of domestic violence. She is also currently working with Canadian Prime Minister Justin Tradeau on a project to provide opportunities to women and children of First Nations Origin.

Gracefully accepting the offer, Jain launched Celestial Pageant LLC under her established organization BeTheYou. She believes Celestial Pageants offers a global channel to married women of Indian diaspora and showcases their warmth, love and compassion for victims of domestic violence around the world. Celestial Pageant’s winner delegate titled as “Mrs India USA Universe” will get to compete for the title of Mrs. Universe with delegates from all over the world at a country/continent chosen by the Mrs. Universe forum.

Celestial Pageants conducted the 2016 edition and selected the inaugural Mrs India USA Universe 2016 at large. After carefully evaluating the delegate’s stage presence, her dedication to a platform and her confidence, Mrs. Anita Sharma, was selected for the title. She was then groomed for nearly three months by Mrs. Jain for this International pageant. Mrs. Sharma, born and brought up in India, is a resident of USA for over a decade now. She studied to be an engineer and is a homemaker. She is a happily married and is a mother of three young boys.

Mrs India USA Universe 2016 competed at Mrs Universe 2016 competition that was held inChinafrom August 28 to September 6. While looking graceful, elegant and poised is part and parcel of the pageant, she also confidently delivered her speech on the platform of domestic violence at the forum. She spent over a week with 70 delegates from around the world. The week was full of events such as welcome meet and greet, touring the city, commercial glamour photo/video shoots, domestic violence forum, long rehearsal hours and talent round. Eventually the gala night took place at Nansha stadium inGuangzhoucity on September 4 with over 10k attendees from around the world. The global beauty pageant was conducted by Mrs Universe Ltd. in association with Government of China.

The Mrs Universe 2016 crown was bagged by Mrs.Austria2016 Mrs Olga Tomer. The delegates were also awarded superlatives the night before the gala night and Mrs India USA Universe 2016 proudly bagged Mrs Delicate 2016 award. The event was covered by major media companies from Asian continent and was broadcasted live on TV.

Mrs India USA Universe 2016 has returned home after living this enriching experience which she says is very empowering. She believes that being on an international stage such as this one was a dream come true for her. She says she is back a different person after experiencing this journey and she will continue to make a difference in lives of under deserved girls. She makes a personal call to all women to come forward and experience this lifetime experience and dedicate their life to a worthy cause.

The story of patan patola