Tagore is in the US for Leadership Training at Massachusetts Institute of Technology (MIT). Members of the Atlanta community mingled with the young Indian politician and discussed the influence of NRIs in Indian politics and India’s political scenario. 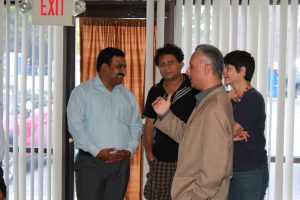 Several prominent members of the Atlanta Indian community including Ani Agnihotri, Dr. Narsi Narasimman, Vir Nanda, and others were in attendance. Atlanta based Sethu Baskaran, a member of Tagore’s family, was instrumental in organizing the luncheon with support from UIBS and IPN.

“We had a very productive discussion about India’s young population and its growth, and about education and employment,” said Baskaran, in an email communication.

The Virudhunagar constituency is where former Tamil Nadu chief minister Kamaraj was born. It is also on the map for its fire cracker industry in Sivakasi.

Tagore is credited with working to make Madurai an international airport to benefit the southern districts of Tamil Nadu and the neighboring state of Kerala. Now, there are multiple international flights going via Madurai. In 2012, Tagore was earlier invited to Oxford University and also to watch the US Presidential election as an observer.