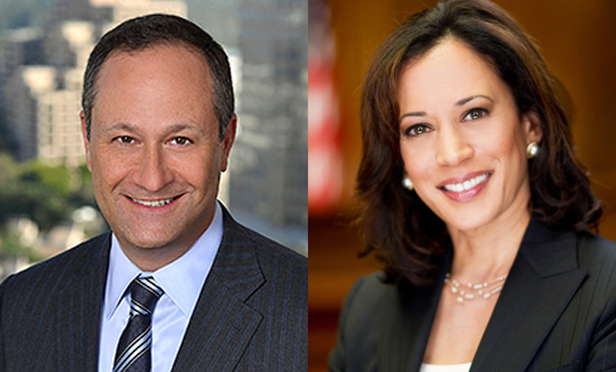 Maya Harris, sister of the bride, presided over the Aug 22 marriage ceremony in the Santa Barbara courthouse as a cellist played in the courtroom, according to a report in San Francisco Gate.

Born in Oakland, California, Harris is the daughter of an Indian mother, Dr. Shyamala Gopalan, a breast cancer specialist who emigrated from Chennai in 1960, and a Jamaican American father, Stanford University economics professor Donald Harris.

The bride and groom wrote their own vows, with the help of Harris.

The ceremony also included the bride’s niece, Meena, reading from Maya Angelou’s poem “Touched by an Angel,” which ends, “Suddenly we see that /love costs all we are/ and will ever be./ Yet it is only love/ which sets us free.”

Emhoff, 49, was previously divorced, and has two children, one in college and one in high school, according to The Sacramento Bee.

The Harris sisters grew up in a household that combined Hindu and Baptist teachings, and were raised in Berkeley, Oakland, and Montreal, where their mother took a position doing research at the Jewish General Hospital and teaching at McGill University.

Kamala Harris attended Howard University in Washington, DC, and received her Juris Doctor (JD) from University of California, Hastings College of the Law in 1989. She was admitted to the California bar in 1990.

The First Naxal: An Authorized Biography of Kanu Sanyal