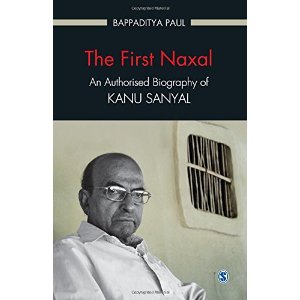 It is amazing to know that Krishna Kumar Sanyal alias Kanu Sanyal, one who played a critical role in the outbreak of the Naxalite movement, began his life as an anti-Communist. Kolkata-based journalist Bappaditya Paul tells us that Sanyal developed hatred for Communism after the CPI denounced Subhas Chandra Bose for siding with Hitler. This very readable book is a story of how that very Sanyal later embraced Marxism in its most extreme form – and went on to regret it later.

This is as much a story of the Naxalite movement that plunged India into chaos in the late 1960s and early ’70s as much it is a saga of Sanyal. Paul also reveals that it was Sanyal who was the real father of the peasant revolt in Naxalbari village in West Bengal in May 1967 that ignited what came to be known as the Naxalite movement and not Charu Mazumdar though the latter was its ideological father – and face.

Based on 121 sittings with Sanyal since 2007, this book meticulously unveils how Sanyal and his comrades built the CPI and later the CPI-M in Siliguri region that included Naxalbari. Mazumdar was the reason Sanyal embraced Communism as a whole timer. But Sanyal says his biggest regret was his failure to oppose early on Mazumdar’s disastrous advocacy of “annihilation of class enemies” that turned West Bengal into a killing field for years – and ultimately destroyed the CPI-ML from within.

Sanyal tells the author his many differences with Mazumdar. A highlight of the book is the clandestine journey overland via Nepal that Sanyal and three other CPI-ML leaders made it to China where Mao told them to follow what was suited for Indian conditions and not to blindly ape Chinese methods. Mazumdar refused to pay heed, triggering the beginning of the end of the CPI-ML — formed in 1969.

Once Mazumdar died in 1972, there was nothing left to keep together whatever was left of the CPI-ML. China’s bombastic claims that the Naxal revolt would herald a revolution in India proved to be hollow. By then, Sanyal was in and out of prisons – and a wiser man.

However, his repeated attempts to bring together the scattered Naxalite groups failed. Sanyal, however, remained a revolutionary, refusing even the requests of West Bengal chief minister Jyoti Basu to return to the CPI-M. As the years progressed, Sanyal’s health declined. He lost vision in one eye and was partly blind in the other. A 2008 cerebral attack made him lonely and desolate.

But he refused to give up his Spartan lifestyle – and continued to live among poor tribals and tea workers. He had no income and survived on doles. In March 2010, apparently unable to suffer physical hardships any more, Kanu Sanyal committed suicide in the very region where he tried to stroke a revolution.

In an otherwise excellent book, the author has gone overboard comparing Sanyal with Mahatma Gandhi, calling the Naxalite leader “one of the very few Indians whose life was a message in itself”. No Naxalite leader should ever be compared with the Mahatma. Sanyal himself admits to giving green signal for revenge killings. Indeed, when one looks back, even the blame for the killings of a large number of bright young men and women who took to Maoist ideology in the 60s and 70s should be laid on Mazumdar and his lieutenants, Sanyal included. It is a different matter that Sanyal repented much of this later.