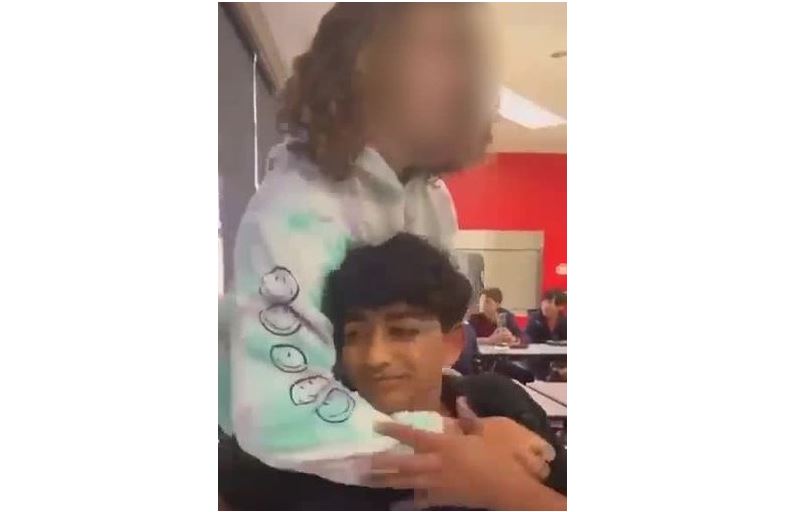 UPDATE, May 17, 2022: Mark Lassiter, the attorney for the family of the other student, told NBC 5 that the student was responding to “vulgar and violent threats against his family”.

“We are confident that after all the facts are revealed, the case will be closed and no further action will be taken other than what the school has already decided was appropriate,” the statement reads in part, reports NBC 5.

The attorney for the Pritmani family, Marwa Elbially, denies the accusations. “The school can preach all it wants that they’re antibullying and place it on their website, but they are sending a message to this kid and the rest of the student body that this behavior is acceptable,” said Elbially.

Atlanta, GA, May 16, 2022: A video clip of an Indian-American middle school student bullied and held in a choke-hold by a classmate in Coppell, Texas last week has gone viral over social media.

“On Wednesday, May 11th, during lunch, Shaan Pritmani was physically attacked and choked by another student at his middle school. The school called his parents and informed them that their son had been in an altercation with another student. The school stated that the victim (Shaan) was at fault and he received a 3-day in-school suspension, while the aggressor only received a 1-day in-school suspension,” says a change.org petition started in Shaan’s support.

As of Monday, May 16 afternoon, the petition has garnered over 95,000 signatures.

Shaan’s friends shared the video of the assault with his parents. They said Shaan wasn’t at fault, the petition says. “Shaan’s parents reached out to school authorities, shared the evidence, and requested a reassessment. The school informed the parents that they have seen the video and that there will be no change in the course of action. The Coppell ISD School Resource Officer (SRO) refused to file a citation because the school administration asked it not be written, as there have been too many bullying complaints lately.  The Coppell PD also dropped the ball. The parents tried in vain for over 2 hours to get a complaint filed, but were refused.”

Shaan’s aggressor in the video is supposedly on the wrestling team and can be seen carrying out a restraint on Shaan’s neck.

“Due to lack of support from the Coppell ISD (Independent school district) and the Coppell PD to correctly handle this assault, we are demanding that the aggressor be removed from my son’s school immediately,” the petition says.  “Shaan should never have to take a class, interact, or pass the hallways with this aggressor ever again.  Shaan should be able to continue his school experience, friendships and extra-curricular activities with zero worry of ever having to cross paths with this student again.  He does not feel safe.  “

According to a post on the Justice 4 Shaan Facebook page, during the incident, the coach came over to take Shaan to the nurse. “The Assistant Principal took Shaan from the nurse’s office to his office. He was openly upset with Shaan and gave him his 3-day ISS (In School Suspension) for “harassment”.”

Shaan and his aggressor were, according to the post, placed in the same room to serve the first half-day of their ISS, and again, the following day for half a day.

An email dated May 15 sent by the school superintendent to parents, refers to the incident as “a physical altercation between two students.”

“Because of student privacy laws and this being an ongoing investigation, we cannot share any further specifics on this situation or student discipline matters. What we can say is that this incident is being investigated and addressed by the school and the district according to the CISD Student Code of Conduct.”

“We have policies and procedures in place that we are following. We also adhere to the state’s anti-bullying laws in our investigation, as well as work with our School Resource Officers and local police department when necessary. This process deserves the necessary time it takes to be thorough and accurate for all parties involved.”

Facebook page created by supporters of Shaan said, through a post said its goal is to bring awareness to the bullying problem in schools everywhere. “All children deserve to be safe at school. Serious repercussions need to be in place for all violence against our children.”

Link to the petition: https://www.change.org/p/assaults-at-schools-protect-the-victim