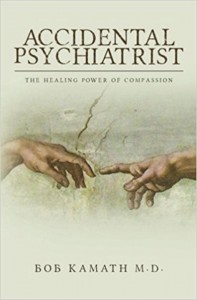 The book Accidental Psychiatrist which is partly autobiographical, and partly self-help narrates the story of Dr. Prabhakar Kamath, a successful psychiatrist in the city of Cape Girardeau, Missouri. “In this book I hope to reveal to readers the healing power of compassion, while giving them a glimpse into my life as a psychiatrist in America. Over the past few decades, the medical profession has gradually changed from noble profession that healed people into a business that treated disorders. I hope to give evidence to the fact that compassion is an essential part of healing people and it is time the medical profession integrates compassion in treating sick people,” Dr. Kamath writes.

K.P.S. “Bob” Kamath practiced psychiatry for 39 years before retiring in 2010. He has treated thousands of patients during that time. After completing one year of internship at Elmhurst General Hospital in New York (1970-71), he trained in psychiatry at Connecticut Valley Hospital/Yale University program (1971-74). After working as a staff psychiatrist at Arden Hill Hospital, Goshen New York for three years (1974-77), he worked as the Medical Director of St. Francis Mental Health Center in Cape Girardeau, Missouri (1977-80), and then as Chief of Medical Staff at Farmington State Hospital, Farmington, MO (81-82). In 1982, he established a private practice in Cape Girardeau, MO. He retired in 2010.

Accidental psychiatrist recounts Dr. Kamath’s experiences as a physician in America from 1970 till his retirement in 2010. This is continuation of his earlier book – “Is your balloon about to pop – Owner’s manual for the Stressed Mind” published in 2007 for the benefit of his private clients. This book is autobiographical. It provides, for the first time, a candid insight into the personal life of Dr. Kamath. He narrates his personal struggles which he had to overcome, and how they shaped his life. It begins when he was six years of age, living in a four story apartment in Mumbai with his parents. He was regularly bullied by bigger boys who would not let him enter his home or stand at the gate. He had no one for help, and he vowed never to be helpless again. He joined the local gym and became strong. He promised never to let anyone bully him again. He learned early that the only way to deal with a bully is to fight back. He got into numerous fights with older and stronger boys in high school and college, but stayed true to his mantra of “zero tolerance for bullies” at all cost.

This theme emerged repeatedly in his life. Whenever faced with injustice, unfairness and abuse, he fought back the person, the system, and organization – no matter how big it was. Even as a trainee in his early career, he spoke out against the poor standards of teaching and treatment at numerous instances. He worked hard to bring the changes in the two hospitals where he worked. Even in his private practice- when the Health Maintenance Organizations (HMO), Medicare, other companies tried to bully him in dictating their terms- he stopped accepting all insurances. He lost over half of his income in the process but he maintained his freedom to give the best treatment to his patients.

The book also speaks out against the over medicalization of the American health care system. Dr Kamath explains how as an intern in Elmhurst hospital in 1970, he was shocked by the lack of empathy and compassion in the American health care. He personally became victim of the impersonal medicine when his newborn son developed birth complications because of wrong treatment. He realized his personality and temperament did not suit internal medicine. Despite getting good job offers, he switched his specialty and enrolled in psychiatry. Psychiatry as a specialty satisfied his desire to form deep and meaningful connection with his patients, and treat them with compassion.

He completed his psychiatric training, and worked in successfully in two hospitals. He had a handsome salary, a house and was living the American dream. But after two years, Dr. Kamath felt an irresistible pull to return to India and fight corruption. He was discouraged by his family and friends who thought it fool-hearted. However, he could not ignore the call of his motherland. He prepared himself by reading Gandhi and the civil rights movement. He started a consumer movement in Udupi in 1980 based on Gandhian principles and methods.  He trained other activists on the root causes of culture of corruption in the government, strategies and tactics to deal with corrupt government officials, and how to break the mental blocks of people. He taught people that all changes first begin within. He has lived his life as per the Gandhian principles “Be the change you want to see in others”. He wrote a book based on his experiences. The book called “Servants not Masters” was first published in 1987 by Consumers’ Forum of Udupi. It was translated in Kannada.

The Accidental Psychiatrist is also a self-help book. The author describes the healing power of compassion. In the Accidental psychiatrist – there are four chapters which talks about the harmful effects of stress and how to manage them effectively. The book is an essential guide to all those who are looking for stress management coping skills. Accidental Psychiatrist is also must read for all budding psychiatrists and psychologists. It offers valuable insights on how to lead a medical facility as the author recounts his success in reviving a failing hospital as its medical director. It also provides practical wisdom on running a private practice, in a time when many private practitioners are feeling pressurized by the managed care health companies. It is an inspirational book by a man with an indomitable spirit and originality.

Following retirement, Dr. Kamath has remained active in the Cape Girardeau community in Missouri. He has, and continues to write for several websites and news magazines.

Links to all Books by Dr. Kamath: