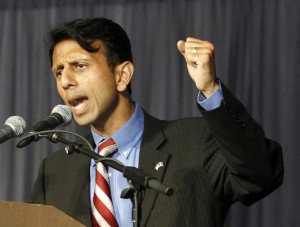 Washington, July 16 (IANS) Louisiana’s Indian-American Governor Bobby Jindal will not make a decision about a White House run in 2016 until after November as he tries to make his Republican Party “stop being the stupid party.

Jindal, 43, who had warned the Republican Party against remaining the “stupid party” after Mitt Romney’s rout in 2012, thinks “we’ve made progress, but there is more work to be done.

“Second, I think it’s important we continue to be specific about our policy proposals,” he said

“It’s very unpopular, be against a president whose poll numbers are falling, and don’t give them anything to shoot at,” Jindal said.

But one cannot “change the direction of government, getting the country back on track…unless you are willing to put out specific ideas.”

Jindal’s policy organization, America Next has already outlined his proposals to repeal and replace Obamacare, with future plans on education reform and energy policy coming in the coming months, Time said.

“In a Republican Party divided over tactics and policy, Jindal is trying to carve out a niche as the wonkiest candidate,” the magazine said.

The “thing that worries me the most is this president’s relentless attempts to redefine the American dream,” he said.

Jindal suggested voters who voted for Obama in 2008 “thinking he was being less ideological, he was being more competent, he wasn’t going to be hyper-partisan, and they are deeply disappointed.”

Jindal also blamed Obama for having “played a role in helping to create the crisis” with a surge of unaccompanied minors crossing America’s southern border with Mexico.

“It’s time for him to secure the border, but I think this is also telling in that it goes to the competence of the administration,” he said.