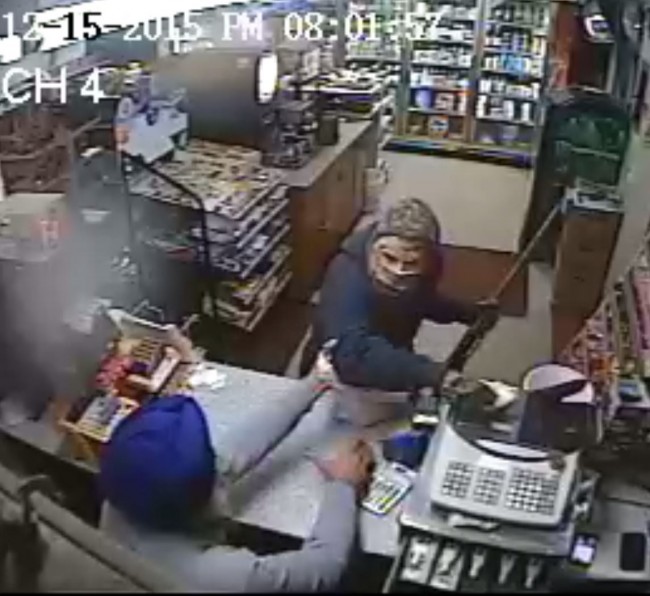 Amrik Singh is seen confronting a masked gunman Tuesday (Dec. 15, 2015) at his petrol station in Staatsburg, about 160 km from New York City, in a still from a surveillance video. Singh threw a slipper at the gunman trying to rob the store ,momentarily distracting him, and charged at him. The gunman fled after firing a shot that missed Singh. (Credit: Courtesy of New York State Police)

New York, Dec 18 (IANS) A slipper can be mightier than a gun in the hands of a valiant Sikh store-owner!

In a feat caught on surveillance cameras, the 59-year-old Amrik Singh fought off a shotgun-wielding masked robber using only his slipper in the store at his petrol station in Staatsburg, about 150 km from New York City. (The video can be seen at: https://youtu.be/YbYtHWCi8BQ )

“I’m not really a hero,” Amrik told IANS Friday about Tuesday’s slipper-shotgun face-off. “And I would not want to be a hero. I am just a working man.”

Singh, who immigrated to the US from Doburji in Punjab’s Moga district 35 years ago and has owned the Citgo petrol station and store for 19 years, said he did not have a strategy or a conscious plan to confront the gunman.

But “God told my body to grab the man as he reached for the tray in the cash register”, he said.

“When the gunman jumped back, I threw the slipper and hit him on the nose,” Singh said. “I ran and caught him and we were like wrestling.”

Laughing, the turban-wearing Singh said: “He did not expect an old man to fight him. He ran outside and I chased him. He fired a shot at my feet, but it missed and hit the ground and he drove away.”

Asked by IANS about Singh’s feat, his wife, Baljinder said: “It is shocking and crazy. He had a guardian angel protecting him.”

When the would-be robber entered the store with the gun, Singh said he was momentarily taken aback. “After that my mind was clear and I was not nervous at all.”

He said he first tried to reason with the man and offered to give him money. “But he demanded $100 dollar bills. I told him I did not have any. He tried remove the coin tray and search under it.”

That’s when the confrontation caught on the surveillance video that made prime time TV newscasts across the United States Thursday night started.

Singh does not plan to take chances if there is another robbery attempt. “I am a US citizen and I am going to apply for a gun licence.”

Police don’t recommend such acts of bravado. State Trooper Melissa McMorris was quoted by the Daily Freeman as saying “Thank God, the store owner wasn’t hurt in the confrontation.”