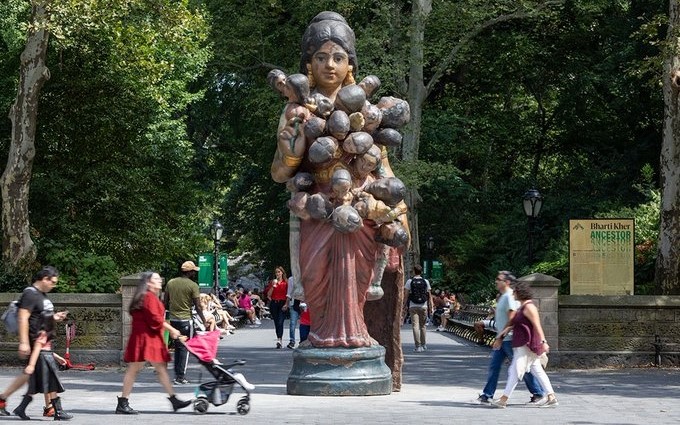 New Delhi, Sep 9 (IANS) An 18-foot-tall patinated bronze sculpture by New Delhi- and London-based artist Bharti Kher was unveiled at the southeast entrance to Central Park in New York on September 8 (on view through August 27, 2023).

Depicting a universal mother figure linking our cultural and personal pasts and futures, ‘Ancestor’ is Kher’s most ambitious work to date. The sculpture stems from the artist’s ongoing ‘Intermediaries’ series in which she reassembles small, broken clay figurines of humans, animals, and mythical beings into hybrid figures that defy a fixed identity.

Brought to life at a monumental scale, ‘Ancestor’ embodies the complexity and potential of the ‘Intermediaries’, and of Indic and global traditions of creator deities that challenge identities by bringing together male and female into a single philosophical form.

‘Ancestor’, however, is a resolutely feminine figure. Adorned with the heads of her 23 children that extend from her body, she embodies multiculturalism, pluralism, and interconnectedness. They manifest a sense of belonging and celebrate the mother as a keeper of wisdom and the eternal source of creation and refuge.

“‘Ancestor’ is exactly the kind of monument we need in the 21st century,” said Public Art Fund Adjunct Curator Daniel S. Palmer. “It is a deeply personal expression of hybridity and global identity that invites a dialogue about the importance of honouring our ancestors and fostering cultural exchange.”

Connecting New Delhi and New York City, Ancestor reflects Kher’s cross-cultural identity and her appreciation for India’s rich material culture. The sculpture proposes a genealogical, spiritual, and metaphysical inquiry into the meaning of society and is a sensitive investigation into our relationship with progeny, self, and memory.

Ancestor articulates the artist’s ongoing consideration of the female body in history and the nature of corporeality as it moves between the sacred and profane. The artist’s unique approach to materiality in her choice to hand paint and patina bronze to look and feel like time-worn clay reflects the unresolved state between permanence and fragility. Draped in a sari, with a small child hiding behind its folds, and her fantastical hairstyle of a multi-lobed bun with braid, the mother stands tall at the entrance to Central Park. In contrast to monuments that glorify historical figures and commemorate traditional symbols of authority, ‘Ancestor’ inhabits the public space as a powerful female force paying homage to the generations before and after her.

“I invite viewers to leave their wishes, dreams and prayers with ‘Ancestor’; and to pass on their wisdom of living and love to the next generation,” says artist Bharti Kher. “She is the keeper of all memories and time. A vessel for you to travel into the future, a guide to search and honour our past histories, and a companion-right here, right now-in New York City.”