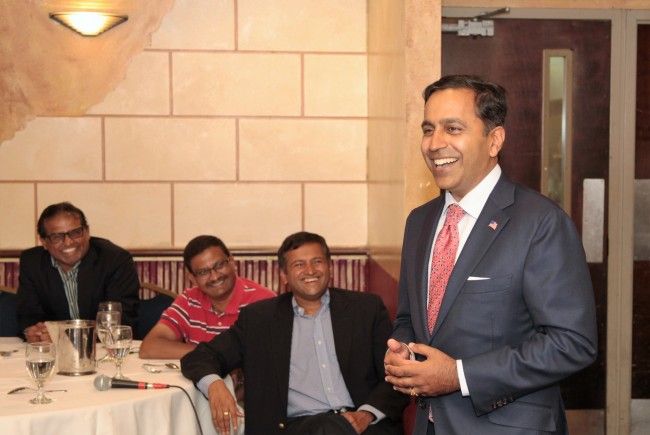 Congressman Raja Krishnamoorthi during his 2016 visit to Atlanta (File photo).

The community is experiencing unprecedented political success with all of its five elected members being nominated to key Congressional panels, reported Forbes.

This represents the largest number of Indian Americans to ever serve in Congressional history, said the report on Monday.

M.R. Rangaswami, the founder of San Francisco-based non-profit Indiaspora, told Forbes, “This doesn’t count the scores of Indian Americans senior staffers serving on Capitol Hill working for dozens of members on both sides of the aisle.”

Judge Dilip Singh Saund became the first Asian American to be elected to Congress in 1956. Nearly four decades later, Bobby Jindal was elected to the House of Representatives from Louisiana before launching a successful gubernatorial bid in the state.

Beyond the legislative branch, Donald Trump’s election to the White House is also proving a boon to some members of the community, according to the report.

South Carolina Governor Nikki Haley has been tapped to become the first-ever Indian American US Ambassador to the United Nations while Indiana native Seema Verma has been nominated by the President-elect to run the Centre for Medicare and Medicaid Services.

Since American immigration laws were liberalised in 1965, Indians travelled to the US in record numbers and the Indian American community has become the wealthiest, most educated diaspora in the country.

The Forbes report said that before outgoing President Barack Obama took office for the first time, not a single Indian American had ever served as an American ambassador. Now there are two, Atul Keshap in Sri Lanka, and Rich Verma in India, who have earned consistent praise for their diplomatic work.

Many other qualified Indian Americans have also served in varying levels across the Executive Branch.

The Indian American community has also made its mark on the judiciary, said the report.

In addition to numerous local and state judges like Sanjay Tailor in Chicago’s Cook County, several Indian Americans are serving as so-called “Article III” judges, judges who are nominated by the President and confirmed by the US Senate.

In 2013, Sri Srinivasan became the first Indian American appellate court judge after being unanimously confirmed by the Senate to the District of Columbia Circuit Court of Appeals.

Kentucky District Court Judge Amul Tharpar’s name has been floated as a possible contender for the vacancy under Donald Trump.

“As Indian Americans have continued to succeed and prosper in the United States, their sense of commitment to the United States, desire to give back, and simultaneously strengthen and be a part of the fabric of the country has also grown as well,” Sanjeev Joshipura, director at Indiaspora, told Forbes.