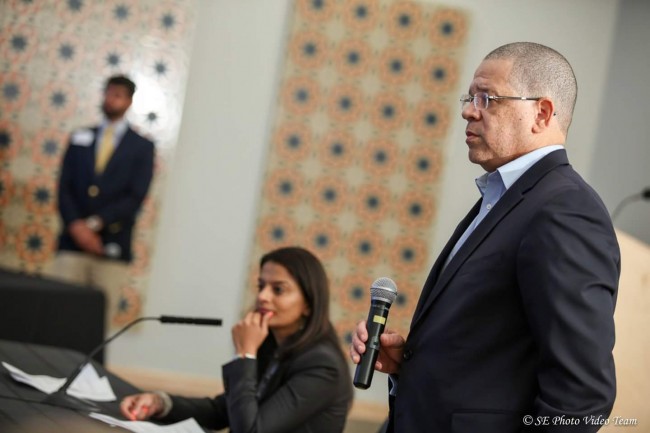 With the election for Mayor of Atlanta set for November 4, 2017 and fast approaching, it is the civic duty and right of Atlantans to be aware of the nine candidates vying in the race to replace current Mayor Kasim Reed. The candidates – including both current and former city officials, a state senator, and the sitting Commission Chairman of Fulton County- offer a variety of stances on key topics of debate such as education, police recruitment, and jobs. NRI Pulse recently sat down with Fulton County Commission Chairman John Eaves to discuss his political platform and how it pertains to the needs of and issues facing Indians in Atlanta and the greater metro area.

Dr. John Eaves was elected to his third four-year term as Commission Chairman of Fulton County in November of 2014. He has led the state’s most populous and diverse county since 2007;Fulton County is home to nearly one million residents and 15 municipalities/cities, including Atlanta. During his leadership,Fulton County has been identified by the National Association of Counties as a 2017 NACO Achievement Award Winner under the category Civic Education and Public Information for its transparency in keeping the public informed about the county government and its operations.

In addition, Fulton County has seen the development of two youth initiatives: the START Program, aimed at encouraging scholastic achievement and increasing high school graduation, and the the Fulton County Youth Commission/Global Youth Leadership, aimed at exposing youth to politics and “non-local approaches to meeting universal challenges”. Dr. Eaves is a “firm believer in fiduciary responsibility, accountability, and efficient operations”; thus during his tenure,Fulton County has been able to maintain $47,792,000 in reserves and has not seen an increase in General Fund taxes.

In addition to his duties as Commission Chair, Dr. Eaves provides leadership training and executive coaching at TalentQuest as an Executive Consultant, is a published author, and professional speaker. Dr. Eaves also has a strong background in education with a Bachelor’s in Mathematics from Morehouse College, a Masters in Religion from Yale University, and a Doctorate in Education and Administration from the University of South Carolina. He is also the recipient of two Fulbright Scholarships and the former Southeast Regional Director of the Peace Corps.

In regards to political platform, Dr. Eaves has a four-point plan for the city of Atlanta. First and foremost, he wants to unite the city as “One Atlanta: a city that truly embraces the tremendous diversity that we have here, including the Indian-American Community”. Moreover, he wants to make Atlanta a safe and vibrant city by embracing diversity among racial, economic, and cultural lines. He firmly believes “that all people deserve to feel safe in our city whether you work here or you live here”. Therefore, he is committed to utilizing technology and has plans for an integrated camera surveillance system in which Atlanta will have cameras placed strategically around the city in addition to businesses and neighborhoods being given the opportunity to purchase surveillance systems that can be integrated into the city’s overall camera system, because he believes that “a very visible, vibrant camera/surveillance system is a deterrent of crime”.

Additionally, he plans to make sure that the Atlanta Police Department is adequately staffed and as robust as possible. Furthermore, he plans to make Atlanta a city with heightened mobility that enables people the mobility to travel freely. He considers Atlanta to be a “city that is choking as a result of our success, where we have two million cars that come through our city, our highway network every day, and the infrastructure system to facilitate the mobility of people is not as strong”. Thus, he is committed to building a regional transit system where MARTA will expand beyond the boundaries of Atlanta to the five surrounding counties in order to help facilitate mobility. Additionally, Dr. Eaves was intricately involved with getting the citizens of Atlanta to vote in favor of the addition of SPLOST (Special-Purpose Local-Option Sales Tax), which will generate a billion dollars in revenue over the next five years towards infrastructure rehabilitation. He plans to oversee the execution of projects funded by SPLOST – such as repairing roads and bridges, synchronizing traffic lights, and building out parts of the Atlanta Beltline – as Mayor. Fourthly, Dr. Eaves is committed to developing a robust public education system.

“To me, one of them is inclusiveness. The Indian-American community, although relatively small in numbers, currently is wonderful in terms of impact: in terms of the high number of Indian-Americans who are physicians, owners of hotels, or who are very prominent in the IT industry, the healthcare industry – serving as doctors; So you have this tremendous representation in IT, in healthcare, in hospitality- representation that is over and beyond the actual numbers of people who live here, who are wonderful taxpayers, contributors of the tax base, as property owners and as people who are involved in commerce in our city. And so I want to make sure that all Atlantans, but especially the Indian-American community, feel more welcome in terms of being represented in City Hall, appreciated, and recognized for the strength and the assets that they bring to the city. I’ve had quite a bit of interaction with the Indian-American community over the past several years, and especially recently, with business owners, in the IT arena, as well as physicians, and it’s just a vibrant community. And they’ve all told me that “Mr. Chairman, we like you and we believe in you. We just want to be included more,” and so I’ve pledged to those who I’ve met with as well as to your reading audience that I’m going to be as inclusive as humanly possible”

In an attempt to promote inclusivity, Dr. Eaves established the Interfaith Council a year ago and provided an opportunity for people of different faiths to give a prayer at public meetings, marking the first time that a local government has ever provided an opportunity for non-Christians to pray at local meetings. He is devoted to bringing the same level of respect and inclusivity as Mayor of Atlanta. Furthermore, Dr. Eaves personally resonates with the Indian community’s struggles with immigration and claims to have a “kindred spirit” with Indian-Americans due to his grandfather’s immigration to the United States in 1913 from Jamaica.

He believes that Indian-American business owners should have the opportunity to compete for business with the city of Atlanta. His current Chief of Staff Nazeera Dawood is testament to his understanding of the need for diversity in local government and has the following to say: “Chairman John Eaves is a collaborative leader and believes in bringing diversity to the initiatives he champions He has a good track record of accomplishments working with communities across the board”.

Dr. Eaves invites a partnership with the Indian community and welcomes inputs and engagement with his campaign to be the next Mayor of Atlanta.