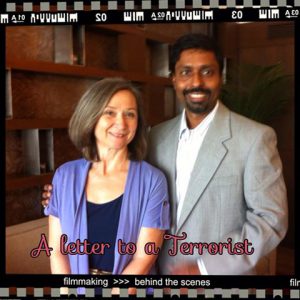 Atlanta, GA: A new short live action film entitled “A Letter to a Terrorist”, directed by Atlanta based filmmaker Parthiban Shanmugam, has been banned by the Tehrik I Taliban Pakistan after organizers were about to show the film at The Children’s Society in Lahore.

The film features The One Life Alliance Foundation (www.onelifealliance.org) founder Kia Scherr, wife and mother of Alan and Naomi Scherr who were shot and killed at the Oberoi Hotel in the Mumbai terrorist attack of November 26, 2008. Produced by Shanmugam’s Vennila Films, the film contains a reading of an actual letter written to Ajmal Kasab, the lone surviving terrorist before he was executed on November 21, 2012. The film premiered on May 19th at the Cannes Film Festival. It was also shown at the International Youth Festival in Rio where it was given an historic third screening and viewed by Pope Francis, who said after that he “appreciated the message.” The film was selected for the 10th annual Indian Film Festival, which took place from July 17th to 21st in the German city of Stuttgart.

In response to the banning by the Taliban, filmmaker Parthiban Shanmugam said, “The Women & Children’s Society of Pakistan (an underground progressive alliance) approached me through a common friend who works with Pakistan Foreign Service to show the film in Pakistan. I was so impressed with their work and agreed.  They loved the film and said that this film should be shown to all children in Pakistan. They had made several arrangements through a film festival organization in Lahore. Unfortunately by word of mouth the news spread about the film and then comes the ban from Taliban. Although the organizers were willing to take a risk, I requested them not to screen the film in Lahore. I am not scared of the Taliban and I will make more films like this to spread the message of peace!”

Kia Scherr said, “What is ‘not permissible’ about a film with forgiveness? The One Life Alliance is a peaceful response to violence, and “A Letter to a Terrorist” is a heartfelt message that we hope will reach the human being underneath the terrorist, and inspires young discontented people to choose a peaceful path.”