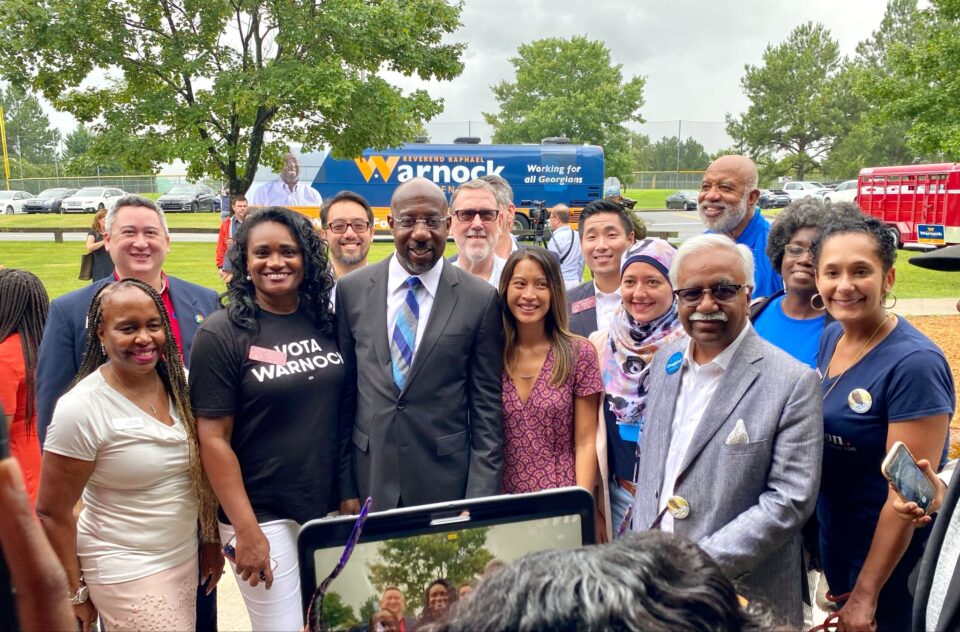 Atlanta, GA, September 19, 2022: It was a rainy Friday afternoon, yet over a hundred people from the Asian American & Pacific Islander (AAPI) community gathered to support Reverend Warnock. Reverend and Senator Warnock hosted a rally with members of the AAPI community in Duluth. Warnock’s bus tour is called “Working for Georgia.” During the stop in Duluth, he discussed his efforts to protect jobs in Georgia and lower costs for Georgia families across the state.

The 2020 General and the 2021 Run-off elections saw a huge voter surge among the AAPI community, including the South Asian community. Democratic AAPI grass roots organizations played a key role in in flipping both the presidential and senate seats to Democratic. Both Republican and Democratic campaigns are trying to woo AAPI voters for the mid-terms as well and believe that they will help towards the margin of victory.

Reverend Warnock fought hard to pass two critical legislations to address Georgia students’ debt, costs, supply chain issues, and create and protect Georgia jobs in the Senate. He fought to pass the Inflation Reduction Act, including his provisions to cap the cost of insulin at $35 per month and cap out-of-pocket prescription drug costs for seniors in Georgia on Medicare.

He also fought to pass the jobs and competition bill, which was recently signed into law and will invest in domestic manufacturing, protect Georgia jobs, and reduce reliance on foreign nations like China. He said” I’m proud that we were able to pass the jobs and competition bill, because we shouldn’t be waiting for chips that come from China where we can make those chips right here in Georgia, where we can put small businesses to work, where we can create jobs for our citizens.”

Bob Christian, who is the Democratic nominee for the US House GA’s 6th district who attended the event told me “I am always honored to share a stage with Senator Reverend Warnock. Through a lifetime of service, he has shown how much he cares for everyone who lives in Georgia. With all that is on the ballot in November, women’s rights, healthcare access and affordability, and voting rights (to name a few), it is critical that we re-elect Senator Reverend Warnock to a full term and strengthen his position by electing democrats up and down the ballot at every level of government.” Bob is a small business owner, a non-profit founder, a combat veteran, and a father of two amazing girls. He began my career serving ten years in the US Army including a combat tour in Iraq. His unit patrolled the “Triangle of Death” and hunted down terrorists such as Chemical Ali.

Michelle Au, State Senator from District 48 said this about him “Senator Warnock, not his opponent, is working to ensure affordable healthcare access for every Georgian, because he understands that fundamentally, at its core, healthcare is a fundamental human rights issue.” Michelle is a mother of three wonderful children and two dogs is also an Anesthesiologist and is running for GA State House 50.

Debashri Sengupta, who attended the event, told me “It was an emotional experience listening to Sen. Warnock, after working hard to get him elected. I have been following his work in the U.S. Senate. I admire Sen. Warnock’s sincerity, his dedication to making healthcare in GA affordable and accessible, and to actually fulfill his campaign promises by working with both Democrats and Republicans. I like that he doesn’t resort to name-calling and that he stays focused on the job we elected him to do. We need his clear eyed, inspiring leadership in GA.”

The Senator has been a key member of the Senate “to get things done” and making sure that the Senate passes important and impactful legislations that benefit all Georgians. He has been a beacon of light and hope for not only Georgians but for all Americans amid deep polarization and misinformation. He has been steadfast in doing his job, that Georgians sent him to Washington DC, to work for Georgians.