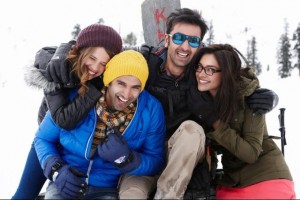 A solemn, studious and sedate medical student decides on an impulse to join her former schoolmates on a trekking expedition. The group includes a carefree, cheery, cool casanova and the girl falls for him. They meet eight years later at a Karan Johar style wedding setting and the inevitable follows. Yes, this brings back good old memories of DDLJ. But Yeh Jawaani Hai Deewani (YJHD) is an Ayan Mukerji offering of Wake Up Sid fame; so the milieu is more updated to resonate with today’s youth, something Ayan seems to accomplish with much ease.

Characters and their sketches are all too familiar, daring to dream, wanting to live life on their own terms but the banner and lead characters, especially the leading man, have a way of charming the audience to submission. There is no escaping it, the audience wants to love their hero and enjoy the movie, their mind is made up. I could tell by the cheers and applauses in a completely packed theatre this weekend. Ranbir has a dedicated fan following that will applaud any and all his antics.  And truly well deserved too. He is natural as can be. 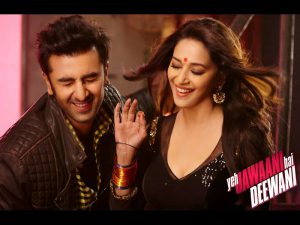 Three friends, Bunny (Ranbir Kapoor) with dreams of exploring the world, Avi (Aditya Roy Kapur), aimless and happy-go-lucky, the born to be wild Aditi (Kalki Koechlin) embark on a journey of a lifetime, only they are not aware of it.  They are there to tread the peaks of Manali and have a good time. They are joined unexpectedly by their chashmish class topper Naina (Deepika Padukone), ex-schoolmate who also wants to live her life, as she puts it. As punkish as Aditi seems, her heart longs for Avi, who is blissfully unaware of her feelings toward him. He flirts with anything female except friends’ mommies (as he confesses), with his partner in crime, Bunny. As expected, love happens in the picturesque Manali, but only for Naina. Bunny is in pursuit of his happiness – to travel the world and living on the edge, never settling for the mundane daal-chaawal (in his words) all his life. That he is off to shores unknown, supposed to be a surprise announcement is revealed accidently. Aditi wishes him luck, realizing at that moment that it is time to grow up and that things are never going to be the same again. Avi, dreaming of sharing a room and opening a bar with Bunny, seems betrayed by his friend. Naina is unable to profess her love but Bunny, oblivious to it all, is simply determined to chase his dreams.

Eight years later Aditi is all set to tie the knot with the quintessential geek with a heart of gold at a resort in Udaipur. All friends are invited. It is time to relive and rehash it all, the good, bad and the ugly. And there are no big surprises here.

Ayan’s biggest triumph is his portrayal of characters and situations without over the top melodrama. It is laid back and natural, not even expecting you to dwell between the lines. Take for example the conversation between the leads, when Bunny talks about watching Phantom of the Opera on Broadway, Naina simply points to the bliss of watching DDLJ with popcorn in Maratha Mandir. Nothing deep or profound, yet endearing in a way that captures the masses. Some truly tender moments are shared between Bunny and his dad played by Farooq Sheikh, who shows us what it means to be a parent in his most subtle yet sustained ways. In his limited space, Farooq steals the show.  Aditya Roy Kapur as the drunk fills in his shoes with ease and the tomboy played by Kalki Koechlin manages to hold her own. Where Ayan fails, is the unconvincing transformation of a footloose casanova.  Ayan’s focus is on creating mass appealing scenarios between the pair and it works. However, even when Bunny lands in India, just for the wedding, determined not even to visit his parents’ home, it appears that he still subscribes to his old values and aspirations. While the song and dance sequences at the wedding are truly enjoyable, it does not explain his change of heart. It feels like a salad with way too much dressing. Yes, dressing is good, but you still need your veggies!

It appears that Ayan wanted to play it safe, engaging his characters in scenarios he knows will appease the audience. My understanding of the title meant that the characters would truly entangle themselves in some Deewani (madness) in their Jawani (Youth). I was hoping to watch them work through those with unforeseen outcomes. And even if the prime focus was romance, I wish the narrative substantiated Bunny’s decision more convincingly.

Ranbir and Deepika are in top form whether they are exchanging smiles, silences, or insights. Deepika is gorgeous and gracious and slips into Naina’s character like a glove. Her restraint and refinement are refreshing – watch out for the scene where she holds her herself back from revealing her feelings for Bunny when she learns that he is leaving to the States for his education.  Ranbir Kapoor was born to be Bunny. It is as pleasurable as watching Michealangelo carve David. The sculptor knows his craft. No, he is not the kind of hero out to save the world, for sure. He is in in fact more self-absorbed than any of the characters but is unpretentious and self-assured enough to strike a balance between good and the bad. Ranbir is a treat watch as he brings this character to life; he sure makes the Kapoors proud.

V. Manikanandan captures his locales at their picturesque best, be it Manali, Udaipur or Europe. Pritam’s has some peppy numbers including Baktameez Dil, Ghagra, filmed with Madhuri Dixit.

YJHD exudes a vibrant, vivacious vibe that is truly enjoyable, in spite of its elongated parts. I missed the pagalpan Bunny talked about – I was hoping for more Deewani from their Jawani, I suppose!