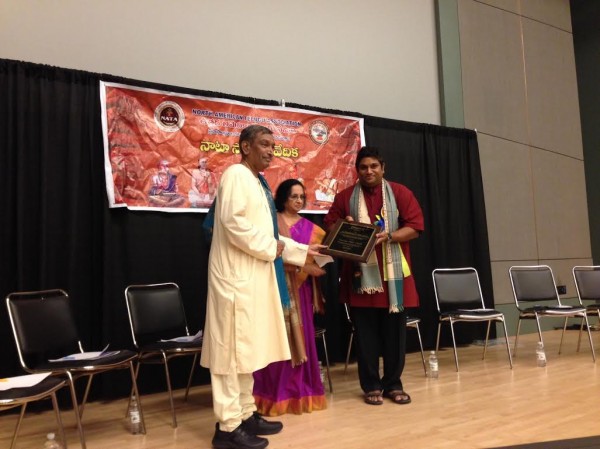 Atlanta,GA: Maitri announced its annual award a few weeks before the NATA Convention 2014 was held. This year’s award went to Sreenivasa Phani Dokka, a well-known young writer and singer from Atlanta. The award was presented on Sunday July 6, 2014 at the Georgia World Congress Center during the NATA Convention.

Dr. P.V. Rao, who was a professor of physics at Emory University was the first Telugu person to come to Atlanta in 1966 along with his family and was a father-figure for the entire Indian-American community. Dr. Rao was very passionate of Telugu Literature and introduced Telugu to North America through his writing. He wrote several books and used to contribute articles to many magazines. He was a regular attendee of literary meetings (Sahitya Sadassu). Dr. Rao was close to the Dalai Lama. With the efforts of Dr. Rao His Holiness the XIV Dalai Lama was named Presidential Distinguished Professor at EmoryUniversity.

Phani Dokka, the recipient of the Award, had an emotional attachment to Dr. Venugopala Rao and considered him as his mentor, guide and philosopher. In fact, he wrote an exclusive poem about Dr. Rao in which he narrated his association with him.

The award presentation was held a few minutes before NATA Atshtavadhanam in front of a captive audience and literature lovers.

Viju Chiluveru, coordinator of Maitri gave a brief introduction about Maitri and the award and requested the audience to observe a moment of silence to pay tribute to Dr. Rao. Later he requested Dr. Managaraju Vanapalli to speak about Dr. Rao. Dr. Vanapalli briefly recollected a few extraordinary moments he remembered about Dr. Rao. He said Dr. Rao played a key role in establishing India American Cultural Association (IACA) and helped several Telugu organizations in the country. Dr. Rao loved literature and the arts ,beside his own subject Physics.

Later Mrs. Lakshmi Rao was invited to present the award to Phani Dokka. She presented the gold medal while Dr. B. Krishna Mohan gave away the plaque.

Phani, said that he is very fortunate and blessed to be the recipient of an award named after a legend he was very closely associated and adored. He read out a poem he recently wrote after hearing the news of his award.