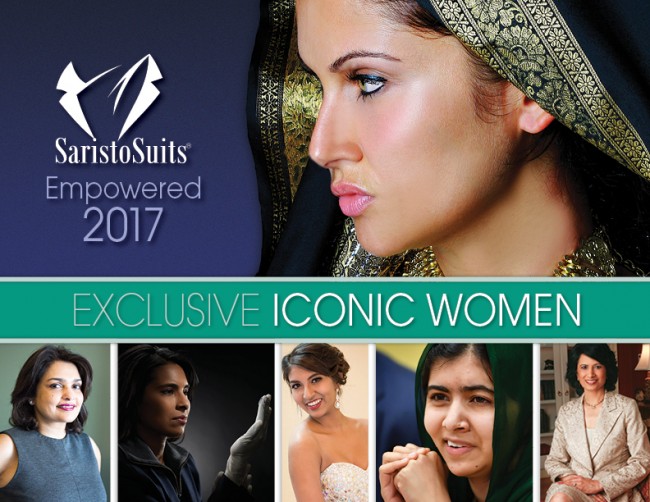 Atlanta, GA, November 2016: The Saris to Suits Empowered 2017 Calendar  includes powerful, bold, and inspirational women who internationally known or noteworthy.  The three Atlantans included are PurseN CEO Hardeep Melamed, the Deputy Chief of Staff at the Fulton County office of the Chairman, Board of Commissioners Dr. Nazeera Dawood, and the green-eyed cover role model Cara E. Yar Khan, who prepares for a Grand Canyon expedition to shatter taboos and stigma against people with disabilities.

The charity calendar includes iconic women such as Nobel Prize Winning Malala Youzfai, The Houston University President/Chancellor Dr. Renu Khator; and the winner of the Arjun Award, or what is the equivalent to the “Sports Hall of Fame” Roopa Unnikrishnan,

“What an incredible tour de force!  Congratulations on your vision and beautiful result,” wrote role model Dr. Sangeeta Bhatia in an email to the Saris to Suits Founder Patti Tripathi. “It’s sure to inspire many hearts and minds. It made me teary to look through it. It’s optimistic and strong and beautiful. Thank you so much for including me in this project.”

That’s saying a lot coming from the brilliant Dr. Bhatia, who is the winner of what is equivalent to the “Oscar for Inventors.”   The mother of two young girls is a biomedical engineer with a Ph.D. from MIT and an M.D. from Harvard. Using computer-chip technology, this  researcher has devised a way to craft “micro-livers” in her lab, an innovation that could lead to artificial organs for transplant. 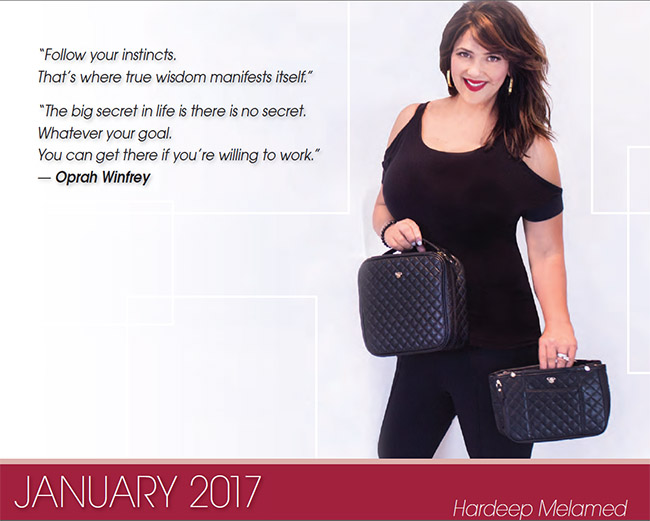 The Calendar year begins with Uganda-born, Canadian raised Punjabi-American Hardeep Melamed.  Her Atlanta-based PurseN travel and purse organizer has catapulted into a rage for stylish women on the go.  PurseN is listed on the coveted Oprah’s “Most Favorite Thing List” for 2017. 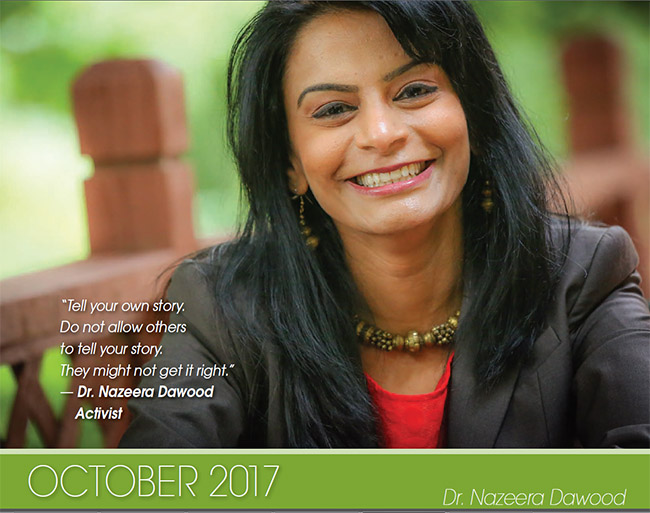 Activist Dr. Nazeera Dawood publicly announced she was molested as a child and wants to make a difference in other children’s lives.  “Truth is bitter and has set me free. After all these years, I now have the inner strength to take the challenge of creating better environments for others because of what I endured.  This is the legacy I want to leave behind.  Saris to Suits is giving a voice to the remarkable women and setting many free from the stigmatized women issues,” she said.

UNICEF brought Cara E. Yar Khan from Canada to Atlanta.  In a wheelchair and a walker she is preparing to make a trek from rim to rim of the Grand Canyon. 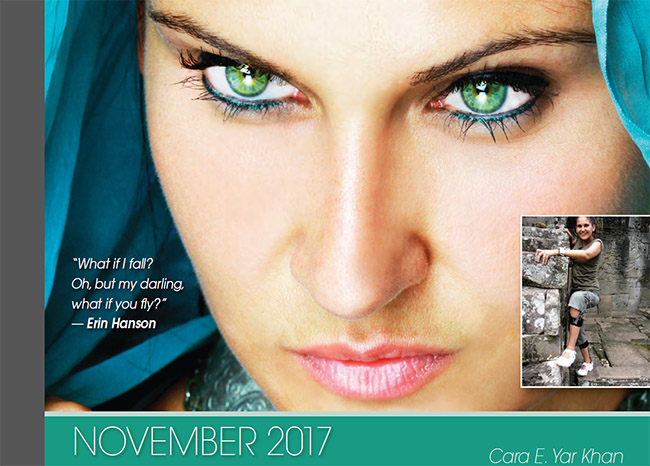 “I have been especially proud to have been born in Hyderabad and raised in the diaspora, to an Indian family that encourages its daughters to be strong, highly educated, competitive in sports, socially engaged, financially independent and successful.  The bar has always been high and I have risen to the occasion with the UN, wanting to make my father especially, proud of me,” Said Khan who was diagnosed with HIBM at the age of 30.  “We all had to learn how to live with a disability and fend off the cultural taboos of being a woman with a disability that do persist with quite a vengeance. Being recognized by Saris to Suits is a testament to how far we as Indians and South Asians have come.”

Saris to Suits founder Patti Tripathi became one of the first Indian-born television news anchors in the USwhen she began appearing on television a decade after she emigrated from near the Nepal/India born at age 12 .  “My physicist father and young mother came to the country carrying three suitcases and three children – my two brothers and I shared one bedroom until I went to the University of Notre Dame.  That’s when they decided to make a home in America.  My brothers are extraordinarily successful, well-educated and kind, thanks to our devoted non-materialistic young Mother.  Sadly,  she passed away at age 56 but we all give back in one way or another our new country and to the Mother land in honor of her memory,” said Tripathi.   “Saris to Suits came into being because of my personal and professional journey, hurdles and successes in the US.”

The calendar includes internationally known and not as well known, but extraordinary women doing noteworthy work being immigrants and daughters of immigrants.  “They are role models for the American Dream and that it is achievable for each and every girl with hard work, education, and determination.”

There are many remarkable and inspirational women included in the 2017 Sarus tio Suits Empowered campaign.  Former network news anchor Kiran Chetry releases the first quarterly magazine called “The Nepalese American Magazine”  soon. March belongs to Dr. Renu Khator, who is the first India-born American to head a major research academic institution.  She’s the President of University of Houston and the Chancellor of the University of Houston System.

‘The role model for the month of April is the Sally Byrd Citizenship Award winner, which is the highest honor given to a single university senior every year for leadership and service at the University of Maryland.  As a young Pakistani-Indian American Muslim woman she’s gone door to door wearing her head scarf to earn  a place in Prince George’s County school board.

Included in the calendar is 17-year-old Rayna Chandra, who accomplished a huge “feet” by becoming the world champion for ballroom dancing.  The exemplary student and the only daughter of Florida physicians wants to study the law to defend victims of domestic violence and assault.  The role model for the last month of the year is Dr. Vanila Singh who is a professor and physician at Stanford University.  She ran for Congress as a Republican in 2014.  Two Floridians have a shared month of January 2018 – they are PwC’s Reshmee Bharratt of Tampa and Orlando,FL who has served on the board of Saris to Suits; and Puneet Singh, a journalist in the making who volunteered for the inaugural 2014 Saris to Suits campaign.

The Saris to Suits Empowered calendar includes role models’ favorite empowerment quotes, world holidays, and important days of women in history.   Calendars may be purchased from Raksha in Atlanta or ordered online: www.SarisToSuits.org  or Info@SarisToSuits.org  @SarisToSuits