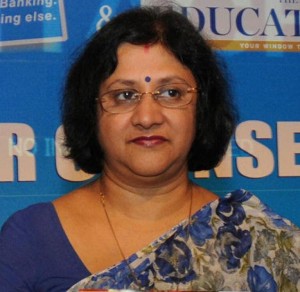 Mumbai, Oct 7 (IANS) Arundhati Bhattacharya, who took over as the new chairperson of the State Bank of India (SBI) Monday, is the first woman to be appointed to the top job at the country’s largest lender.

Bhattacharya,57, who has been managing director (MD) and chief financial officer since August 2013, will hold the office for a period of three years.

Her elevation came after the glass ceiling was broken in 1996, when Tarjani Vakil took over as head of Exim Bank. Vakil’s appointment was followed by Ranjana Kumar, who was appointed chairman and managing director of Indian Bank.

At the Reserve Bank of India (RBI), Shyamala Gopinath, K.J. Udeshi and Usha Thorat have all been deputy governors.

Bhattacharya joined SBI as a direct recruit officer in 1977 and in her extensive service, she has served in metro, urban and rural areas, criss-crossing the length and breadth of the country.

With over three decades of experience, she has held various assignments spanning credit, forex, treasury and retail operations.

As Corporate Development Officer and Deputy Managing Director, she has handled large corporate credit as well as initiatives like financial inclusion and financing of Self Help Groups.

She was involved in setting up several new companies initiatives of the Bank, including SBI General Insurance, SBI Macquarie Infrastructure Fund, SBI SG Securities Ltd, etc., as well as the launch of new IT platforms such as mobile banking and financial planning in the Bank.

“She has also played a pivotal role in setting up three of the latest subsidiaries of the Bank viz. the General Insurance Subsidiary, the Custodial Subsidiary and the SBI Macquarie Infrastructure Fund,” said the bank.

Bhattacharya has also had a stint in the SBI’s New York office where she was in charge of monitoring branch performance, overseeing external audit and correspondent relations.