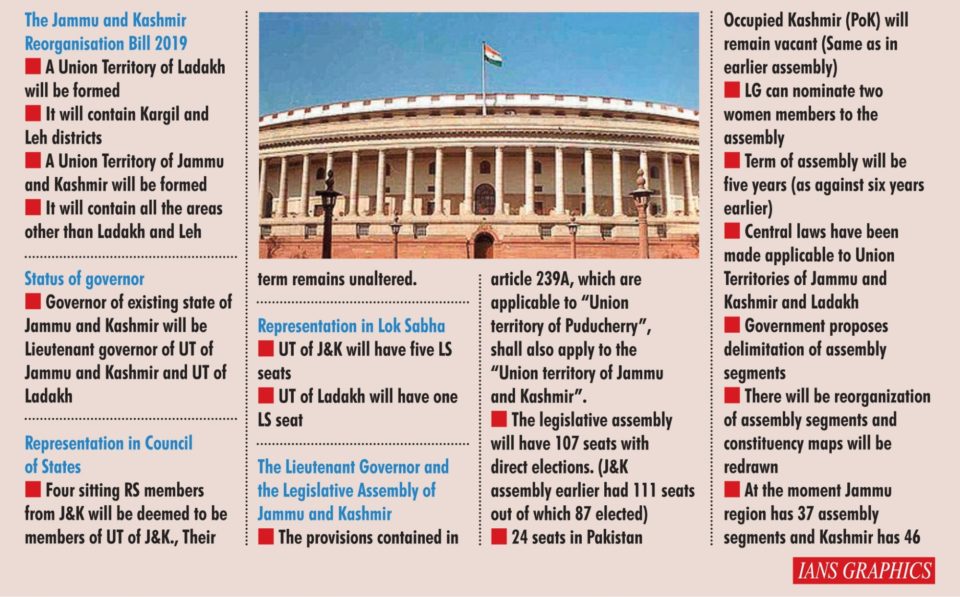 New Delhi, Aug 5 (IANS) Following is the broad framework of how the state of Jammu and Kashmir will cease to exist after Centre’s decision to scrap Article 370 of the Constitution giving special status to Jammu and Kashmir:

The Jammu and Kashmir Reorganisation Bill 2019:
*A Union Territory of Ladakh will be formed;

* It will contain Kargil and Leh districts;

* A Union Territory of Jammu and Kashmir will be formed;

* It will contain all the areas other than Ladakh and Leh.

Representation in Council of States
* Four sitting RS members from J&K will be deemed to be members of UT of J&K. Their term remains unaltered.

Representation in Lok Sabha:
* UT of J&K will have five LS seats;
* UT of Ladakh will have one LS seat;

L-G, Assembly of J&K:
*The provisions contained in Article 239A, which are applicable to ‘Union territory of Puducherry’, shall also apply to the ‘Union territory of Jammu and Kashmir’;
* The legislative assembly will have 107 seats with direct elections. (J&K assembly earlier had 111 seats out of which 87 elected);
* 24 seats in Pakistan Occupied Kashmir (PoK) will remain vacant (same as in earlier assembly)
* L-G can nominate two women members to the assembly;
* The term of the assembly will be five years (as against six years earlier)
* Central laws have been made applicable to UTs of Jammu and Kashmir and Ladakh

What Art 370 prevented:
* Implementation of Right to Information;
* Right to Education;
* Comptroller & Auditor General’s scrutiny;
* Freedom from Sharia law for women in Kashmir
* Rights to panchayats;
* Reservation of 16% for minorities such as Hindus and Sikhs;
* Indians from other states from buying or owning land in Kashmir;
* Stopping Pakistanis from getting Indian citizenship by marrying Indian women from Kashmir.