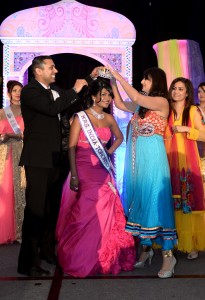 Atlanta, GA: In a well contested finale, Mrs. Arthy Saravanan of Toronto, Canada was crowned Mrs. India International 2014 in the pageant finals on May 3 at the prestigious Crowne Plaza Atlanta Perimeter at Ravinia in Atlanta.  Arthy is elated to be India’s ambassador and feels honored to represent India at the Mrs. International Pageant 2014 to be held in Florida in July.

Mrs. Vanija Kallur, of Battle Creek, Michigan, USA was declared the first runners up and Mrs. Zeenat Wise of Flowery Branch, GA, USA was declared the second runner up after two days of scoring rounds of interview, fitness wear, ethnic wear and evening gown, judged by a competent panel of judges. 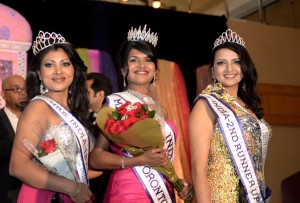 The guests, an involved and encouraging crowd, enjoyed the finals which also included songs by Shergeel Khan and Geeta Khanna, dance performances by Shiv’s Institue of Dance and a fashion show.

Mrs. Shaveta Jain – Mrs. India International 2012 and Shahid Ali were the Masters of the Ceremony.

Mrs. Maya Singh – Mrs. India – Delhi International 2014 could not be crowned due to logistic issues with her crown and sash.

The following segment winners were crowned by Ani and Kiran Agnihotri.

Mrs. Zunera Mazhar of Fairfax, VA was crowned Mrs. Pakistan international 2014. She will go on to represent Pakistan in the Mrs. International pageant in Florida in July 2014. 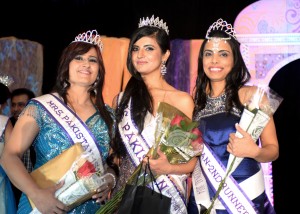 Mrs. Seema Jamani of Karachi, Pakistan was declared the first runners up and Mrs. Shumaila Aziz of Lawrenceville, GA, USA was declared the second runner up after two days of scoring rounds of Interview, Fitness Wear, Ethnic Wear and Evening Gown, judged by a competent panel of judges.

The other finalists were Mrs. Muneera Jooma from Lawrenceville , GA, USA and Mrs. Tina Imad from Ashburn, VA, USA.

Enlightening Photo-Exhibition on Sikh Heritage at Gurdwara Sahib in Atlanta