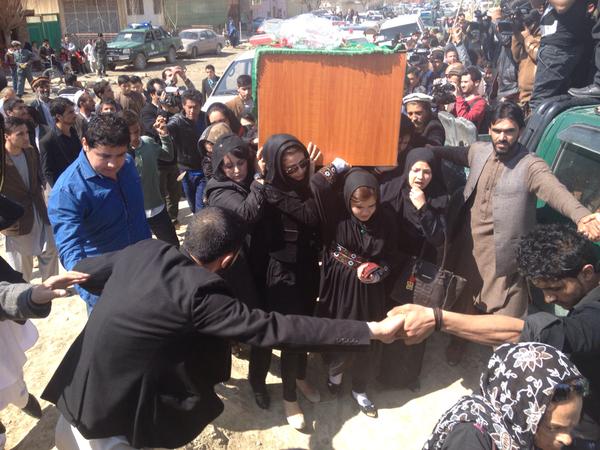 Kabul, March 23 (IANS) Breaking with tradition, angry women in this Afghan capital carried the coffin of a young woman who was burnt to death by religious extremists for allegedly burning the holy Quran.

Farkhunda, 27, was beaten and burnt to death by religious extremists on March 18 at Shahi Doshamshera area in central Kabul after a religious cleric shouted among a group of people that she had burned the holy book.

Her body was then taken and dumped on the banks of the Kabul river.

On Sunday night, thousands of enraged people, including members of civil societies, members of parliament, men and women carried her coffin and buried it in Panjsad family cemetery north of Kabul near her home.

In what was a break from tradition, angry women did not allow men to touch the coffin and carried and buried it. Traditionally, only men can carry the coffin of a woman.

“I condemn this action and till now we have arrested nine suspects in connection with Farkhunda’a death,” Gen. Zaher Zaher said on behalf of the interior ministry at the end of the burial ceremony.

“We will carry out further investigation and arrest all those who had a hand in her death,” he added.

“I will never give birth to a girl when the condition of women is like this in Afghanistan,” a crying woman participating in the funeral procession told the media.

Afghan President Ashraf Ghani has appointed a special committee to investigate the death of Farkhunda who hailed from Kapica province north of Kabul and was a teacher of the Quran.

The protesters also demanded justice for the deceased woman.

Mullah Niazi a well known religious leader and imam of Wazir Akban Khan mosque, wanted to participate in her burial but the angry people did not allow him as he was one of those who had supported the killers of Farkhunda initially.

On Sunday night, people gathered at the place where she was beaten to death and lit candles.

On Tuesday, a large demonstration is being planned in front of the Afghan supreme court.

BAPS closing all temples in USA, Canada, Europe and Australia as response to COVID-19