Atlanta, GA, May 7, 2017: CAMAGA organized a concert of Carnatic vocalist Amritha Murali at Hindu Temple of Atlanta, Riverdale on April 9, which was attended by many connoisseurs of music. She was accompanied by R. K. Shriramkumar on the violin and K Arun Prakash on the mridangam.

Amritha belongs to a family of musicians and her exceptional musical instincts have been well nurtured by her parents and she has gained much acclaim and popularity with the music fraternity as a highly talented musician of the younger generation. 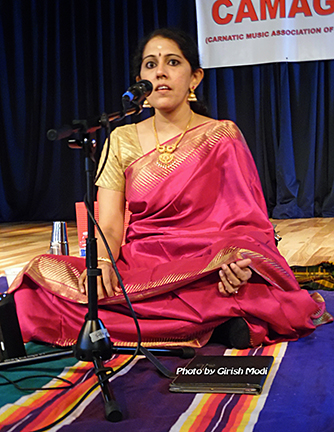 Amritha has had the good fortune of learning vocal music from great gurus including Late Sri K R Kedaranathan, Smt. Meera Kedaranathan, and Smt. Rama Ravi. She also trains under Smt. T.Rukmini for violin playing. Amritha is also under a fellowship granted by the Sangeet Natak Academy, New Delhi to learn advanced raga, tan am and pallavis.

Amritha has been performing for many prestigious organizations all over the country. She has been on vocal concert tours of the U.S.A and Canada. She has also been promoted to sing in the senior slot during the Music Academy’s (Chennai) December music festival.

Musicians, rasikas and critics have been highly appreciative of her adherence to classical values and the aesthetic appeal of her concerts.

In Amritha’s recital, the Sahana vinyasa for ‘Raghupate Rama,’ was exhilarating. Her rendition particularly brought out the sparkle and substance. It was not flat and unadorned, but richly worked out, the sancharas subtly integrated with vocal articulation. Similar was her approach to ‘Neeke Dayaraaka’ (Neelambari), the rhythm in the smooth-flowing sahitya pointing to her talent.

The noble tone and niceties in gamaka brimmed with feeling, while intelligence ensured that the raga was not overstretched in repetitions or inaccuracies. Muthuswami Dikshitar’s exquisite “ Shri Kamalambikayam” (Tisra Triputa) was handled. 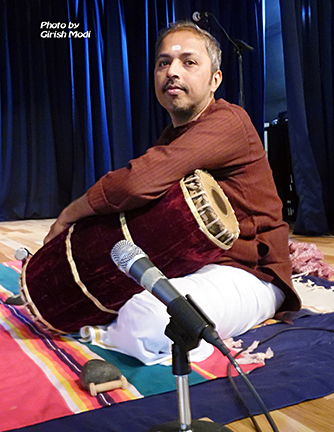 “Clear Diction, clean lines-Amritha Murali’s musical expression reveals an underlying conviction that rings true even to a jaded listener. Her music is refreshingly honest with  no pseudo- iconoclastic propensities to distort the clean lines of her straightforward presentation.”  Lalitha Krishnan , The Hindu, May 2006

Amritha’s music was a showcase of truly classical music replete with aesthetic and emotional appeal. Amritha’s glistening, full-fledged Sahana remained with you long after her concert. 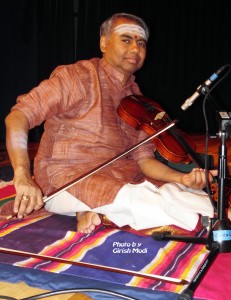