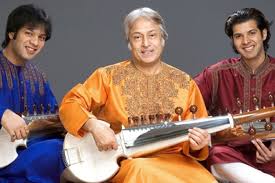 Mumbai, Oct 9 (IANS) India’s sarod maestro Amjad Ali Khan and his two sons Amaan and Ayaan performed live with musicians from across the world for the Chant4Change peace concert at Washingtons Lincoln Memorial on Saturday night. The concert made use of music as the healing unifying force in wounded and terror-infested universe.
However, the rain gods played truant.
Speaking after the concert, Khan said: “We three — my two sons and I — performed while it was drizzling. We dedicated our concert to world peace and harmony. We paid our humble tribute to Martin Luther King, Mahatma Gandhi, Rabindranath Tagore and Hazrat Amir Khusro who created the qawwali and tarana singing styles.”
Khan and his sons began the historical Chant4Change concert with an inspirational number.
“The first item was ‘We shall overcome…’ version ‘Hum honge kamyaab’. Then we rendered ‘Vaishnava jana to’, ‘Ramdhun’, ‘Raghupati raghav rajaram’, ‘Ekla cholo re’ and then we sang a tarana. We ended with Bengali folk music. We hope the whole world soon realizes the value of peace and harmony.
“Collectively, we must give our younger generations a peaceful and harmonious world. Our family feels very sad when we hear about young soldiers dying in the war, no matter which country. We feel connected with every soul, every religion and every song of the world,” Khan said.
Explaining how music can unify people across the world, he said: “People of the world have to think about the value of togetherness, peace and harmony. Collectively, people of India and the world have to create a peaceful and harmonious environment for our children and younger generation.
“India was one before the Partition. That is why even today, it’s Indian classical music that unifies the two countres and their people. We could only divide the land, but could not divide the music.”
He is also worried about the rampancy of terror attacks even in the US.
“The US should not encourage people to openly buy weapons, especially for the younger generation, as it is very dangerous not to have licence for the weapons. The greatest mockery is that every political leader talks of peace and harmony, and at the same time every country is busy producing weapons, guns and missiles.
“The future of the world looks aimless and bleak. The world is heading towards destruction… I hope the world soon understand the value of love peace and harmony.”
He made a plea for artistes to be exempted from political agendas.
“Art, music and musicians don’t belong to any cult or religion. Like flowers, air, water, colour, fire and fragrance, we of the artistic fraternity also belong to no religion. In our country, every classical musician is worshipped like Goddess Saraswati. If we can’t help each other, for god’s sake, don’t destroy each other. Think seriously about the future of every child.”