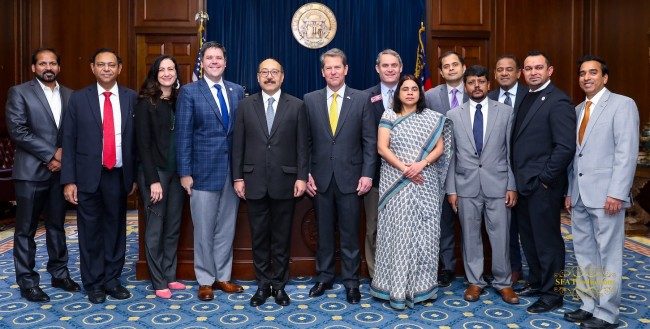 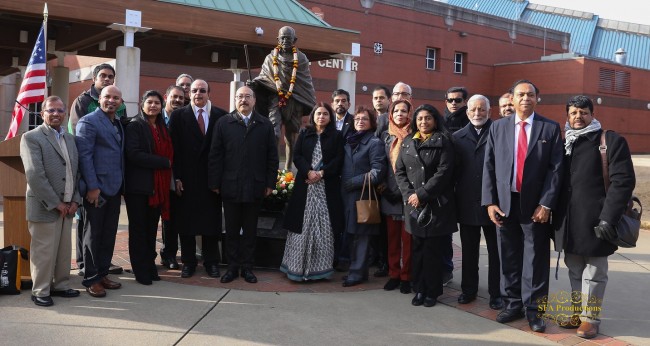 Atlanta, GA, February 2, 2019: Consul General Dr. Swati Kulkarni and her team hosted a reception for the newly appointed Indian Ambassador to the US, Harsh Vardhan Shringla, at her residence on January 30. Ambassador Shringla assumed his diplomatic position in Washington three weeks earlier, on January 11th.

Ambassador Shringla is possibly the first Indian envoy to visit Atlanta within weeks of assuming charge. “The Ambassador was supposed to visit New York first, but we got him to Atlanta,” said Dr. Kulkarni, smiling.

Freezing temperatures notwithstanding, Amb. Shringla and the Atlanta Consulate team had a packed day that began with a visit to the Gandhi statue at the Martin Luther King Jr. National Historic site and concluded with the reception.

The Consul General’s efforts did not go unappreciated. “I would like to thank Dr. Swati and her team for organizing all these events. She is a very capable, able and most affable person and so is her team,” Amb. Shringla said.

“The community is a big source of strength for us,” he said, in his address at the reception. Attributing the growing India-US relations to the community, Amb. Shringla observed that they serve as a positive reservoir of goodwill and support of India. “Our relations with the USA has made a huge amount of progress in the last few years. We are two countries that have recognized that we share values and principles, that we are vibrant democracies, sharing partnerships not just on the bilateral front. The perception of India in the United States has changed significantly. One of the reasons is the growth of the Indian economy, and the success of the Indian community in the US. Our community has shown tremendous growth in the fields of entrepreneurship, technology, medicine, engineering and every field they are part of.”

Commending Indian Prime Minister Modi and his government, Amb. Shringla said, “All over the world, the Indian diaspora was an untapped resource until the Modi government looked at it.” He cited flagship programs such as Skill India, Gyan, and Smart Cities that have contributed to India’s success.

Amb. Shringla highlighted various contributing factors in the Southeast region that add remarkable value to growing relations between India and USA. “The Southeast is a very important area for us. We have about 80 companies from India who have invested 8 billion dollars in the area. We should also look at utilizing Atlanta’s status as an international aviation hub to establish direct connections between Atlanta and India. There are plans to update ports of Savannah significantly, which will increase trade between USA and India.”

Speaking about his meeting with Governor Kemp earlier in the day, Amb. Shringla said he, on behalf of the Consul General, had proposed for Georgia to set up an office in India.

Highlighting India’s economic growth in the past few years, Amb. Shringla noted that India’s buying power and contributions to the US economy had increased significantly. “In the last two years, bilateral trade has increased from $119 billion to $ 140 billion. We have reduced trade deficit from 26 billion two years ago to 19 billion. We are buying $5 billion oil and gas, $18 billion of defense equipment, 300 civilian aircrafts worth 40 billion dollars,” he stated. Having met students at GA Tech, Amb. Shringla said some of the best Indian students who study at American universities contribute $6.5 billion to the US economy.

“All of you are catalysts in this effort in every way possible, not just economical, but through social links and people to people contacts. You are all top representatives in every sector possible. We look for your advice, guidance and help in taking this relationship forward. There are some roadblocks that we must avoid, but I believe we can go a long way,” the Ambassador added.

Amb. Shringla’s eventful day began with a homage to Mahatma Gandhi at MLK Center, which he described as a moving experience for him. He also met with Governor Kemp, visited the Senate and the House, and the Atlanta Council on International Relations, where he spoke about India-US relations. After a press meet with various news agencies, he headed to the CNN headquarters for an interview with CNN International. He later visited the Consulate General, which he said was a proud representation of India. His day concluded with the reception.

The top envoy commended the Consulate general of Atlanta which has issued 160,000 visas, 66,000 passports. 55,000 OCI cards since its inception.

Amb. Shringla’s next stop was to Philadelphia, where he, along with the Indian Air Force accepted the first of the Chinook Helicopters delivered by Boeing. “This is a momentous occasion where we have become the largest repository of US military aircraft in the world with a very wide range of aircraft of world categories,” he said.